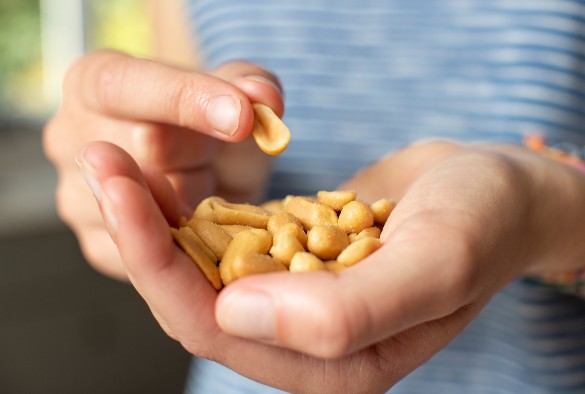 A study by University of Liverpool researchers has identified new factors accompanying previous findings that frequent consumption of peanuts by cancer patients could increase risk of cancer spread.

The study, published in Carcinogenesis shows that Peanut agglutinin (PNA) – a carbohydrate-binding protein that rapidly enters into the blood circulation after peanuts are eaten – interacts with blood vascular wall (endothelial) cells to produce molecules called cytokines.

In an earlier study, Corresponding Author Professor Lu-Gang Yu and colleagues reported that circulating PNA binds to a special sugar chain, which occurs mainly on pre-cancerous and cancer cells, and interacts with a larger protein expressed on the surface of tumour cells in the bloodstream.

This interaction triggers changes in the larger protein, resulting in underlying adhesion molecules on the surface of the cancer cell to become exposed, making the cancer cells stickier and easier to attach themselves to the blood vessels. It also allows the cancer cells to form small clumps that prolong the survival of cancer cells in the body’s circulation. Many epithelial cancers spread to the other organs through traveling through the bloodstream.

Professor Lugang Yu said: “Although further research and investigation are still needed, these studies suggest that very frequent consumption of peanuts by cancer patients might increase the risk of metastatic spread.

“Nevertheless, the possibility remains that circulating PNA, at least at the relatively high levels found shortly after a large “dose” of peanuts, could have a significant biological effect on tumour cells circulating at that time, with a potential for increased risk of metastasis.  Heavy or very frequent peanut consumption therefore might be better avoided by cancer patients.”

The possible impact of heavy peanut consumption by cancer patients on survival will need to be investigated in further population-based epidemiological studies.

This study was supported by the American Institute for Cancer Research.

The study Appearance of peanut agglutinin in the blood circulation after peanut ingestion promotes endothelial secretion of metastasis-promoting cytokines is available here: https://academic.oup.com/carcin/advance-article-abstract/doi/10.1093/carcin/bgab059/6315265?redirectedFrom=fulltext