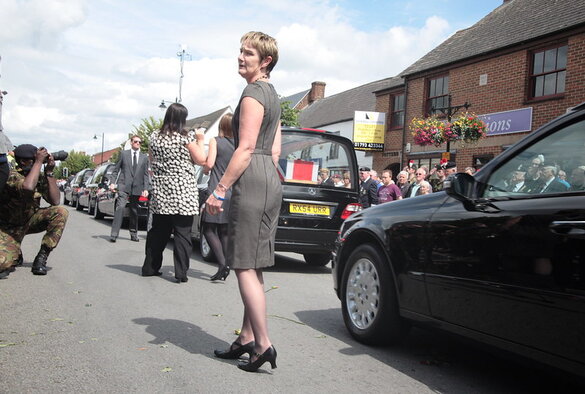 Professor Sandra Walklate is Eleanor Rathbone Chair of Sociology in the University of Liverpool’s Department of Sociology, Social Policy and Criminology. Between 2010-2012, Professor Walklate and colleagues researched the impact of military repatriation ceremonies on the town of Wootton Bassett

From 2007 to 2011, the small town of Wootton Bassett (now Royal Wootton Bassett) became synonymous with the repatriation of the bodies of UK soldiers killed in Afghanistan.

Four hundred and fifty-seven soldiers lost their lives – and thousands more sustained a wider range of life altering injuries both physical and mental – as a result of the conflict perpetrated in the aftermath of the terrorist attacks which took place on 11 September 2001. Many thousands of Iraqi and Afghan soldiers and civilians lost their lives following on from these events in the intervening years. On Monday 16 August 2021, Kabul fell to the Taliban following the final withdrawal of American troops from Afghanistan. Newspapers carry heart rending pictures of people scrabbling to get out of the country from Kabul Airport, whilst diplomats and others fly off to safety: the Americans in chinook helicopters.

Ironically, UK embassy officials returned via RAF Brize Norton, the military air base which replaced RAF Lyneham, where repatriated were soldiers returned to.

In the words of Mark Sheldon, father of deceased rifleman, Adrian Sheldon and quoted by Etchingham (2011): “If Adrian could speak now he’d say, if you die, normally you see Angels, and you’d be off to heaven, if you’re a soldier you see Wootton Bassett”.

These repatriations, and the acknowledgement given to the soldiers killed in this conflict as their bodies traversed the town of Wootton Bassett, were widely covered by the media at the time. These events offered a silent but symbolic presence to the depth of feeling that UK military involvement in Iraq and Afghanistan generated. It must be remembered that over a million people took to the streets in London to protest against the UK government’s commitment to this military action, with the legality of it hotly debated in parliament.

11 September 2001 was one of those transgressive ‘once in a lifetime’ moments which for anyone who witnessed it, they can remember where they were and what they were doing. In my lifetime there have been other such moments (like the assassination of President Kennedy in 1963 or the Warrington bombing in 1993) and they are transgressive because they set in train a series of events that mark our lives.

The events of 11 September marked the beginning of hugely contested military actions on the part of the US, the UK and others, in Iraq and Afghanistan. At the time, and without shame, President George Bush partly justified this course of action as a defence of women and children’s rights. There was little UK government resistance to this rhetoric.

It was in this context that Wootton Bassett occupied a meaningful space for many people.

Myself, along with two colleagues in Sociology, Social Policy and Criminology, spent some time with the people of Wootton Bassett trying to make sense of what the repatriations meant to them, as well as what they seemed to symbolize more generally. One telling observation came from one respondent in trying to make sense of the feelings these events generated.

The reference to “lipstick kisses” resonated with us and became part of the title of the research paper we wrote.

In this paper, we suggest that the events of Wootton Bassett contributed to changing the way in which the sacrifices of war might be recognised. That the repatriation process which took place there tapped into a collective emotional concern with, and response to, the UK involvement in the conflict in Iraq and Afghanistan. Their origins were contested but the loss and pain these events captured is indisputable.

The question many are now asking is, was this military engagement worth it?

It is the case that over this twenty year period, and in the last decade in particular, much effort has put into training the Afghan army and rebuilding Afghan society, including extending the educational and other opportunities for women and children. At the same time of course, the presence of the Taliban has been felt increasingly. Commentators are already taking stock of whether the withdrawal of American troops was timely and/or appropriate, with some  already predicting the greater likelihood of international terrorism. However, for many women and children in Afghanistan the presence of “tear-stained fingers down the window” will undoubtedly mark their lives, but in the short-term probably more invisibly than before.

The research in Wootton Bassett took place from 2010-2014 and involved Dr Ross McGarry, Professor Gabe Mythen and Professor Sandra Walklate, all in the Department of Sociology, Social Policy and Criminology. We are forever grateful to those people in Wootton Bassett who shared their thoughts, feelings and time with us. The views expressed here are those of Sandra Walklate.