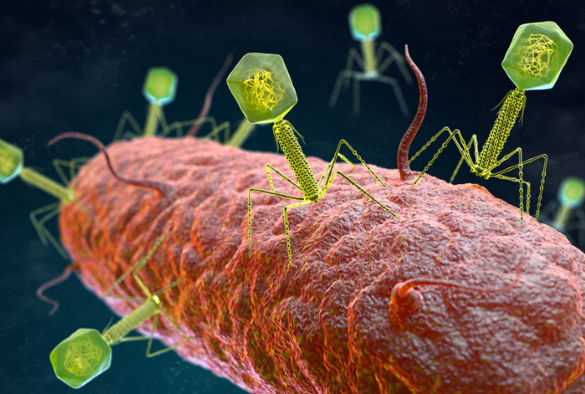 Scientists at the University of Liverpool and Harvard Medical School have discovered a new defence mechanism that makes a lethal strain of Salmonella resistant to viral infection.

The findings, published in Cell Host & Microbe today, shed new light on the survival strategies of Salmonella Typhimurium ST313, which causes thousands of deaths each year in sub-Saharan Africa.

The eternal battle between bacteria and their viruses (phages) has driven the evolution of a wide array of phage defence systems in bacteria. Not to be outdone, phages rapidly co-evolve in an effort to overcome these defences.

Crucial players in the eternal battle are so-called ‘temperate’ phages, which can integrate their DNA into the bacterial chromosome and remain dormant until conditions favour their reactivation.

These hitchhiker phages, known as prophages, play an important role in Salmonella virulence, increasing fitness and sometimes preventing infection by other phages. Identifying and understanding these phage defence systems at a molecular level could ultimately help scientists to use phage therapy approaches to cure disease.

In this study, scientists have identified a new prophage-mediated defence system in Salmonella Typhimurium ST313 called BstA, which efficiently suppresses phage attacks through ‘abortive infection’ – a process whereby infected cells are ‘self-sacrificed’ to prevent the phage from spreading across an entire bacterial population.

The BstA protein system has several intriguing features that have not previously been found to drive phage immunity. Of particular interest, BstA avoids self-targeting via its own anti-defence system, the short ‘aba’ DNA sequence. The aba element allows the BstA defence protein to be deactivated when the prophage needs to find a new host.

“From an evolutionary point of view, prophages can improve their chances of survival by making host bacteria as fit as possible” said study first author Dr Siân Owen, Postdoctoral Research Fellow at Harvard Medical School. “We know prophages carry all kinds of weapons and shields in the form of virulence factors, and defence systems like BstA. Here, we have shown that prophages can use an internal kill-switch to deactivate these defence systems when it’s time to escape the bacterial cell.”

The discovery of the BstA system weaves into a tapestry of knowledge on the molecular innerworkings of viruses and cells. The findings suggest that BstA may protect Salmonella from attack by phages in the African environment, which opens up a new avenue of research for scientists.

Previous work led by Professor Jay Hinton at the University of Liverpool has provided fundamental understanding of the epidemiology, transmission and virulence of African Salmonella to drive forward the development of new treatments and vaccines.

Professor Hinton commented: “This exciting discovery was driven by two talented postdoctoral scientists, Siân Owen and Nicolas Wenner, who did a remarkable set of experiments to reveal a completely new way that Salmonella cells defend themselves from phage attack. Many of the tools we use today in molecular biology, such as CRISPR and DNA-editing technologies, were discovered through this type of fundamental research into the biology of bacteriophages. Not only does our study shed light on the life of African Salmonella, it could one day form the basis of a new biotechnology.”

Related News
Evolution of a killer: How African Salmonella made the leap from gut to bloodstream.