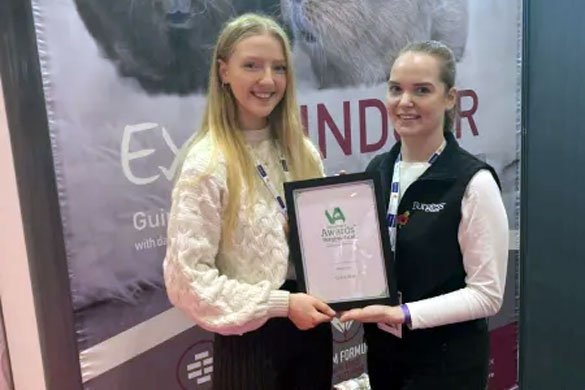 Congratulations to final year Veterinary Science student Grace Mee, who has recently been named Rabbit Student of the Year at the national Burgess Excel Vet awards.

A judging panel of industry experts, veterinary professionals, and rabbit and guinea pig specialists selected this year’s winners in six categories, and announced the awards at the London Vet Show 2021.

The winners were judged on a range of criteria, including their exceptional knowledge of rabbit and guinea pig care and husbandry; outstanding care and attention to the needs of owners and their pets; and going above and beyond to improve the lives of rabbits and guinea pigs.

University of Liverpool student Grace, who was named Rabbit Student of the Year, said: “’Rabbits are the third most common pet in the UK but are so often overlooked. Rabbit welfare is gaining a higher profile and being more widely discussed, especially now that the Good Practice Code for the Welfare of Rabbits has been published in the UK. I am honoured to receive this award and look forward to continuing to support and contribute to this cause in any way I can now and as a future vet.”

Dr Suzanne Moyes MVB MRCVS, Burgess Excel Awards judge and Veterinary Director at Burgess Pet Care said: “On behalf of the judging panel, I would like to offer our huge congratulations to the winners of the Burgess Excel Vet Awards, who are evidently taking great steps to improve the wellbeing of rabbits and guinea pigs in the UK.”

“We received hundreds of applications and nominations for this year’s Awards and the quality of entries was nothing short of outstanding. Everyone who made the shortlist should be incredibly proud of their achievement, not to mention of their hard work and dedication in going the extra mile to look after the wonderful creatures in their care.”

Click here to find out more about the Burgess Excel Vet Awards.