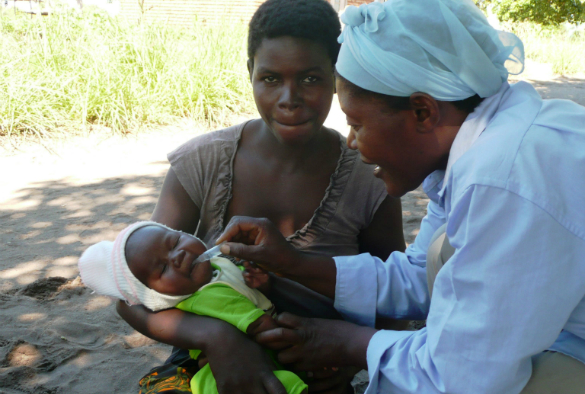 Researchers from the University of Liverpool, Murdoch Children’s Research Institute and the Malawi Liverpool Wellcome Clinical Research Programme have found a reduced dose of a neonatal rotavirus vaccine produced a robust immune response in children at risk from deadly diarrhoeal disease in Africa.

Developed from a unique neonatal rotavirus strain in Melbourne, Australia the RV3-BB vaccine is given to babies from birth with the potential to improve the level of protection, limit barriers to timely administration and improve the safety of rotavirus vaccines.

The phase 2 clinical trial, published in Lancet Infectious Diseases, was co-led by Professor Julie Bines at the Murdoch Children’s Research Institute and Professor Nigel Cunliffe from the University of Liverpool, who has directed a long-term programme of rotavirus research in children in Malawi for more than 20 years.

It assessed the safety and immune reaction to three different amounts of the RV3-BB vaccine in 711 Malawian infants at birth or in the first weeks of life. Three doses of the mid-level amount of vaccine produced an equivalent immune response in the babies, as measured in their blood and stool, as the highest dose schedule.

Professor Bines said, “This level of immune response was similar to our Indonesian phase 2b trial, which used the higher dose. In that trial we found 94 per cent of babies that received RV3- BB soon after birth were protected from severe rotavirus diarrhoea in the first year of life.

“Our results are hugely encouraging when compared to current World Health Organization prequalified and globally available vaccines. The WHO recommends all children receive a rotavirus vaccine.”

Professor Cunliffe said, “While currently used rotavirus vaccines have significantly reduced illness and death from rotavirus disease in Malawi and other African countries with high child mortality, rotavirus is still the leading cause of diarrhoeal deaths in these settings.

“Our data from Malawi offer new hope that the RV3-BB neonatal rotavirus vaccine can further reduce the high burden of disease still attributed to this diarrhoeal pathogen.”

Head of Virology at the Malawi Liverpool Wellcome Clinical Research Programme Dr Khuzwayo Jere said: “It is exciting that the neonatal RV3-BB vaccine was well tolerated in Malawian children in both neonatal and infant schedule when co-administered with Expanded Programme on Immunisation vaccines.”

“It is gratifying to see this neonatal rotavirus vaccine, which was initially developed by Professors Ruth Bishop and Graeme Barnes at Murdoch Children’s Research Institute, perform well in an African population with high rotavirus disease burden. These results support those observed in Indonesia and New Zealand showing great promise to reduce the high burden of rotavirus that we still see in Africa and Asia. We are pleased to support the Murdoch Children’s Research Institute and the University of Liverpool on this important work.”

Current licensee, Indonesian vaccine manufacturer PT BioFarma, is conducting a phase 3 clinical trial of RV3-BB in Indonesia with results due to be announced in 2023.

The trial was funded by the Bill & Melinda Gates Foundation (OPP111055), and an Australian Tropical Medicine Commercialisation Grant (App 50343).