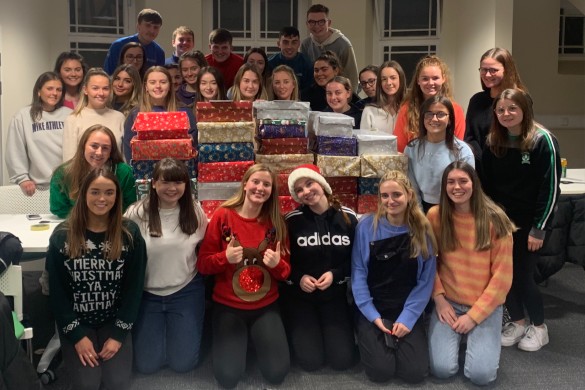 The Gaelic Football club was presented with an award for its work in the local community at the annual Athletic Union (AU) awards.

The club is one of a number of teams recognised at the 36th annual ceremony celebrating the achievements of the AU and its members, which was held at Anfield stadium.

The ‘Club in the Community’ award was created during the pandemic and rewards a club that has turned its focus to the world beyond the University to make an impact in the local community.

The Gaelic Football club received the award after an academic year that saw both the men’s and ladies’ teams work together to help the community through Sport Liverpool and wider campaigns.

Caoimhe Mullan, President of the Ladies Gaelic Football Club said: “Fundraising and community focused projects promote a bond in our club between the younger and older members, and the men’s and ladies’ teams. I think fundraising is important because that’s how our GAA clubs are at home (both in England and Ireland) bring the community together. Now at the end of the season, all our members have felt the impact of these projects by having a home away from home within the club.

“Our whole committee was so excited and buzzing when we heard our name called out. I was shaking all over. At first, I couldn’t believe it, but once we had all sat down and the commotion settled, I don’t know why I was as shocked. We have worked so hard this year in our fundraising projects, I do think the club deserved it. We’re quite a small club so we might not have had as big fundraising figures as other clubs, but we did our best to help and have an impact on the wider community.

“Both our teams have met this year to discuss what charities they would like to fundraise for in the future, and how they would like to do it. This list has been passed on to next year’s committee, and with some ideas such as a BBQ, GAAs Got Talent, and a Greenbank sports day, I’m excited to see what is to come!

“I’d advise anyone wanting to get started with club fundraising events to just make it fun! If players enjoy the fundraising, they’ll enjoy the community of the club, and they’ll want to continue to help. Also set achievable goals. Some of our fundraising initiatives asked players to bring £1 to training, which isn’t a huge amount, but every little helps for charities, and it will always promote the bond within your team.

“I would like to thank our committee this year who worked hard at all the fundraising and community events to make them special for everyone: myself, Oisin Harkin, Aoife Corr, Alice Collins, Jack McCullagh, Sarah Kilpatrick and Niall Shalvey.”