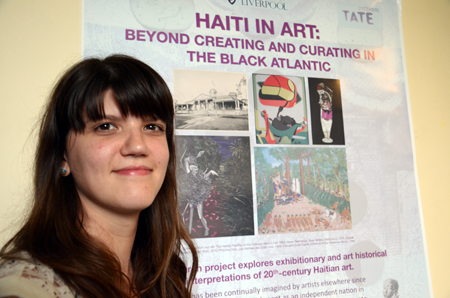 Wendy Asquith: “I hope to encourage a deeper and more direct engagement with artwork from this region.”

Wendy Asquith is from Liverpool, UK, and is studying a PhD on the history of Haitian art from the late 19th century up to the present day. She graduated from the University of Liverpool with a BA in History and Egyptology in 2008 and with a Masters degree in Atlantic History in 2009.

Wendy is now working with Dr Dmitri van den Bersselaar to explore historical representations of Haitian artwork in four exhibitions, including the Haitian Pavilion at the World’s Fair in 1893 and the Haitian Pavilion at Venice Biennale in 2011.  The aim of the project is to explore how various histories including the legacies of slavery and imperialism, may have influenced how curators present Haitian artwork in galleries around the world.

The project, which is funded by the Arts and Humanities Research Council (AHRC), aims to encourage new assessment of past and present assumptions about the art and identity of Haiti, as well as that of the Caribbean region as a whole.

Wendy said: “Through my historically-based research on the exhibition of Haitian art I hope to contribute to the transcending of Caribbean regional and Haitian national stereotypes and in doing so encourage a deeper and more direct engagement with artwork from this region.

“Haitian art is often generally associated with themes such a Vodou, exotic landscapes, bright colours, and having a naive or ‘primitive’ style, but this general kind of analysis does not encompass the wide variety of work by Haitian artists and severely limits perceptions of what Haitian art can be.

“The work of Philome Obin, for example, is often exhibited and discussed next to the work of Hector Hyppolite because they became internationally known in the same period, but in reality their work differs vastly. While Hyppolite’s work was in a spontaneous Vodou-inspired style, Philomé Obin’s artwork was often highly politically engaged, capturing important moments in Haitian history.

“I hope that my research and work with Tate Liverpool will encourage a new appreciation and understanding of the fascinating work of Haitian artists and change perceptions of the contributions Haiti and the Caribbean region have made, and continue to make, to art on a global scale.”

For more information on the Black Atlantic Resource project, please visit the website

Are you a post graduate studying in a fascinating area? Email samantha.martin@liverpool.ac.uk and be part of our Becoming an Expert feature.