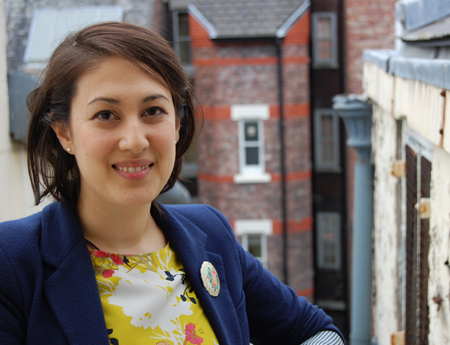 íine Mangaoang: “Is it right that something should become policy, based in part on its popularity with members of the general public?”

íine Mangaoang is from County Wexford, Ireland, and is doctorate researcher on the use of popular music and Internet technologies, looking specifically at a Filipino viral video that fuses pop music with prison rehabilitation.

She graduated from University College Cork in Art History and Music in 2007 and gained a Masters degree in musicology and cultural history in 2009.  She is now working on a four-year PhD at the University of Liverpool’s Institute of Popular Music, to investigate the impact of popular music practices on society.

íine is exploring how audiences receive and interpret music through social media, such as YouTube, by studying one of the earliest internet music videos to go viral.  The Thriller music video was uploaded to YouTube in 2007 and features the 1,500 inmates of a high-security penitentiary in Cebu, Philippines imitating the zombie dance of Michael Jackson’s hit song.  The idea was conceived by the prison chief to help inmates exercise and work together as a team in a positive and enjoyable way.

”The response it provoked from audiences around the world, prompted other prisons in the Philippines to make it policy that inmates perform to popular music songs as part of their weekly exercise regime, whether they wished to take part or not”

íine said: “The film has received more than 50 million hits and continues to attract attention five years after it was originally posted.  It was so popular that the prison warden received requests from members of the public for more song and dance routines.  As a result videos of performances for In the Navy and the recent K-pop phenomenon, Gangnam Style, were later posted.

“The response it provoked from audiences around the world, prompted other prisons in the Philippines to make it policy that inmates perform to popular music songs as part of their weekly exercise regime, whether they wished to take part or not.  This is one of the ethical questions that I am addressing in my project; is it right that something should become policy, based in part on its popularity with members of the general public?”

The research looks at the rise of the professional-amateur music-maker and the questions of copyright law and illegal downloading that it poses for the music industry and its continued survival.

A milestone in participatory cultural history

íine argues that the YouTube prison film marks a milestone in popular music and participatory cultural history, similar in effect, to the impact that Michael Jackson’s original Thriller video had on shaping popular music and culture in the 1980s, that included breaking race barriers, perfecting the art of music video, and shaping MTV.

íine said: “I hope to determine how the Philippines’ unique relationship with popular music and dance might explain the perceived success of this unusual programme. Such research requires detailed reference to Filipino literature to support my dissertation, and so I have been awarded a Visiting Research Associate position at the Institute of Philippine Culture at Ateneo de Manila University to carry out this research.

“Once I have completed my PhD I would like to continue in academia and also use my experience to perhaps support community groups and charitable organisations in how to use music to promote positive societal and cultural change.”