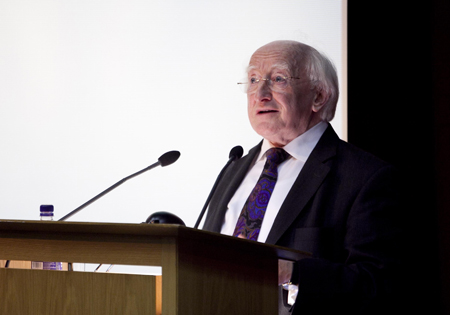 The President of Ireland, Michael D Higgins, delivered the fifth John Kennedy lecture at the University’s Institute of Irish Studies.

His lecture, `Liverpool and its Irish Migrants’, explored the links the city of Liverpool has with Ireland.

President Higgins said: “For centuries past, Liverpool has represented the first glimpse of Britain for generations of Irish migrants and travellers. The mighty docks of Liverpool represented a gateway.

“The mouth of the Mersey became a point of transition to a new life, much as Ellis Island and the Statue of Liberty were for those men and women who travelled west, to New York and beyond”.

Professor Marianne Elliott, Director of the Institute of Irish Studies said: “The Institute was honoured that President Higgins chose to give the John Kennedy Lecture in Irish Studies in this first year of his presidency.

“He marked the huge contribution of Irish people and Irish culture to the city in his lecture.  It was an historic occasion for the Institute of Irish Studies and for the Irish in Britain.”

President Higgins also visited the Memorial to the Great Famine at St Luke’s Garden to lay a wreath in the presence of the Lord Mayor of Liverpool.

President Higgins is the ninth and current President of Ireland, following victory in the 2011 Irish presidential election.

Born in Limerick but raised in County Clare, he studied sociology and lectured at University College Galway before entering politics.  He joined the Fianna Fail party briefly while a student, but soon after switched to the Labour Party.