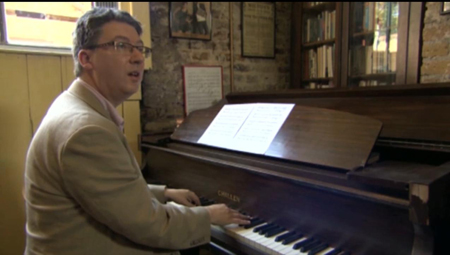 Professor Michael Spitzer is known for his writings on Beethoven, cognitive metaphor, critical theory and effect

Professor Michael Spitzer, from the University’s School of Music, appeared in the BBC series Imagine to demonstrate how emotion is created in popular and classical music.

The BBC arts series features an episode presented by Alan Yentob, asking musicians, psychologists and composers about creating emotion in music and why people turn to music at times when words are not enough, such as at funerals and weddings.

Professor Spitzer showed how the physiological mechanisms associated with fear, such as trembling and pulsating heart-beats, are present in both Schubert’s ‘Unfinished’ Symphony, and ‘Hunter’, by Mala.

He also explored links between sadness in Adele and Albinoni, and fear in Schubert and the dubstep artist Mala. Professor Spitzer explained why Adele’s songs are so emotional, and how the sobbing effects in Albinoni’s famous ‘Adagio’ essentially draw on the same principles.

As a musicologist and music theorist, Professor Spitzer is known for his writings on Beethoven, cognitive metaphor, critical theory, and affect.

A clip of Professor Spitzer discussing Elgar’s ‘Nimrod’ and Wagner’s ‘Tristan Prelude’, on the programme, can be viewed here.