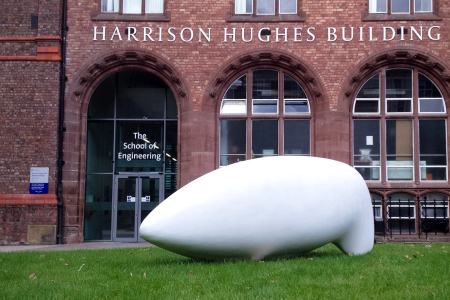 The wind tunnel model outside of the School of Engineering.

A team of University of Liverpool engineering students is looking for four riders to part in a speed challenge to support their attempt to design, build and race the fastest bike in the world.

The students, who have formed the University of Liverpool Velocipede Team, want four riders to take part in the official World Human Powered Speed Challenge in Nevada next year, with the aim of smashing the current record of 83.13mph (133.79kph).

Patrick Harper, who is in his final year of studying towards a master’s degree in mechanical engineering, said: “You don’t have to be Bradley Wiggins to apply for our team, though you do have to be pretty quick!  Most important of all is the ability to commit to the training schedule and of course, take part next year in Nevada.”

”The opportunity to do this as part of our course has led to experiences we’d never normally have had”
Two male and two female riders will be taken to the US as part of the team and there they will race in the ARION1 Velocipede, designed entirely by the students and funded using the sponsorship they have achieved themselves.

The students, from the University’s School of Engineering, will be the first university team from the UK to ever take part in the Challenge.

Currently, full-sized models are being tested in a wind tunnel and the team believes the bike should be 40 times more aerodynamic than a Bugatti Veyron.

Patrick said: “The opportunity to do this as part of our course has led to experiences we’d never normally have had.  It’s taken on a life of its own now and we’re all working very hard to make sure we bring the record back to the UK.”

To apply to be a rider visit: http://ulvteam.co.uk/%20rider-selection/ The deadline is Sunday 5th October.

You can keep up with the team’s progress and see their sponsors on their official website and on social media channels.

Further reading
“The best year of my life” – Formula Student