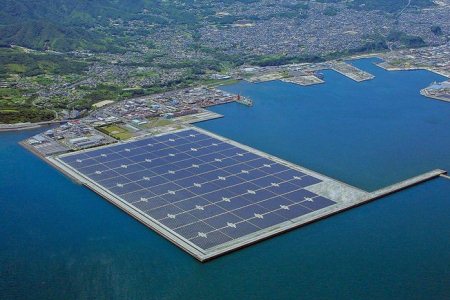 Dr Jon Major is a research fellow in the University’s Stephenson Institute for Renewable Energy.

Two companies in Japan recently announced they are to begin building two huge solar power islands that will float on reservoirs. This follows Kagoshima solar power plant, the country’s largest, which opened in late 2013 and is found floating in the sea just off the coast of southern Japan.

These moves comes as Japan looks to move on from the Fukushima disaster of 2011 and meet the energy needs of its 127m people without relying on nuclear power. Before the incident around 30% of the country’s power was generated from nuclear, with plans to push this to 40%. But Fukushima destroyed public confidence in nuclear power, and with earthquakes in regions containing reactors highly likely, Japan is now looking for alternatives.

Solar power is an obvious solution for relatively resource-poor nations. It is clean, cost-competitive, has no restrictions on where it can be used and has the capability to make up for the energy shortfall. A small fact that solar researchers love to trot out is that enough sunlight falls on the earth’s landmass around every 40 minutes to power the planet for a year. To put this another way, if we covered a fraction of the Sahara desert in solar panels we could power the world many times over.

The technology already exists, so producing enough solar power comes primarily down to one thing: space. For countries such as the USA with lots of sparsely populated land this is not an issue, and there have already been a large number of “solar farms” installed around the country.

Solar power is an obvious solution for relatively resource-poor nations. It is clean, cost-competitive, has no restrictions on where it can be used and has the capability to make up for the energy shortfall
In places like Japan where space is limited, more inventive solutions are required. This is the principle reason behind the decision to move their solar power generation offshore. While the land is highly congested, and therefore expensive, the sea is largely unused. It therefore makes a good degree of sense to use this space for floating power plants.

Somehow though the concept of floating solar plants initially does seem rather jarring. Water plus electricity? We’ve all been raised by popular culture and public safety films to know that those two really don’t mix.

But this isn’t some sort of vast technological challenge that mankind will struggle to overcome. The panels are designed to be waterproof and a number of these types of plants have been built in Japan already, including the large installation in Kagoshima.

Part of the beauty of solar power is how simple it is to use. At a basic level, once you buy the off-the-shelf photovoltaic module, it’s simply a case of plugging it in. The principle engineering challenge of offshore solar farming consists of little more than building a pier and covering it in solar panels.

This may be a slightly glib oversimplification, but consider the relative difficulties in comparison to the construction of an offshore oil drilling platform. These represent a true engineering challenge and a true risk when that challenge is failed, as we saw all too clearly with the Deepwater Horizon spill in the Gulf of Mexico in 2010. The risks and difficulty associated with off-shore solar are vanishingly small by comparison.

Floating solar also has some interesting fringe benefits. Solar modules function much better when cooler, so situating them near water actually helps performance. In India they have also been used as an interesting dual purpose solution. In the state of Gujarat, solar panels were installed atop the Narmada canal, serving to both generate power and prevent water evaporating from beneath.

There is also no reason why the design needs to be so functional. By far the most unique application is the concept of “energy ducks”, giant floating solar panel-coated water fowl which have been proposed to sit in Copenhagen harbour acting as both a tourist attraction and carbon-neutral power source. This may never happen unfortunately, but it is a rather wonderful demonstration of how solar power can be applied in many different ways.

Solar islands could certainly be a solution for other countries where space is an issue – it’s possible that one day a significant portion of Europe’s power could be generated by giant solar pontoons in the ocean. The technology exists and the engineering challenges are nothing that can’t be overcome. The only questions now are whether the will is there to push solar islands as a solution and more importantly do we make them duck shaped?