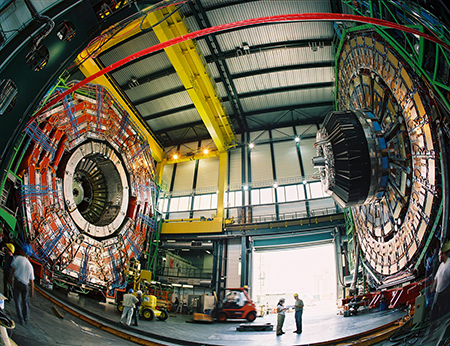 In particle physics, it’s our business to understand structure. I work on the Large Hadron Collider (LHC) and this machine lets us see and study the smallest structure of all; unimaginably tiny fundamental particles, held together by fundamental forces to provide the microscopic skeleton of matter.

The LHC is shut down at the moment, but will start gearing up for another round of data-taking in about six week’s time. Given our success at teasing out the subatomic structure of the universe from the data we’ve already got, why do we need more? What unfinished business drives us to carry on?

If the first data-taking run of the LHC did anything for us, it was to demonstrate how remarkable our theory of the subatomic universe, the Standard Model, is. Our measurements of the particles produced in the LHC, and their subsequent behaviour as they travelled through our experiments, confirmed Standard Model predictions at every stage.

Even better, two LHC experiments found the only particle, the Higgs boson, predicted by the theory and never seen. At Liverpool, we contributed to that discovery and much else besides. When the LHC shut down for maintenance and upgrading in 2013, it did so on a high.

But everything isn’t that straightforward.

We may have confirmed our theory again and again but, increasingly, we’ve also gathered evidence that it isn’t right, that it isn’t the last word. The Standard Model simply can’t explain some of the most prevalent and fundamental features of the universe; the identity of the dark matter that binds galaxies together, why antimatter dropped out of existence less than a second after the Big Bang, even how gravity behaves at the subatomic, particle physics scales where quantum rules rule.

We don’t even know much about the Higgs boson yet, just that it resembles our expectations, although its true nature might be more exotic.

These observations make us suspect that there must be a better, more fundamental, extensive description of the universe. We just don’t know what it is yet. There are hundreds of ideas out there, ranging from gentle extensions of the Standard Model to frankly freaky bizarreness.

One of these, if we’re lucky, will be more correct than the theory we have already. We can sift out that theory if we can make just one measurement that supports it, and that disagrees with the Standard Model. That hasn’t happened yet. This is why we are keen to test the new data from LHC, where it might, because this is how our understanding of the universe is going to move forward.

”For us, this is like going to a new world and exploring without a map. Except our journey is bigger than that; our journey doesn’t involve a world, it concerns the universe”

This year, LHC steps it up a notch. Over the shutdown it has been so extensively checked out, revamped and optimised, that it is almost a new machine. Over one million man hours have been spent proofing it to operate as close to design energies and beam power as we can get.

The step up in energy from 2012 operation, where the LHC ran at a little over half speed, to 2015, is similar to the step in energy from the world’s previous high energy accelerator to LHC when it started. This higher energy unveils the universe in a way never seen before; with more microscopic detail, with a field of view surpassing anything we’ve ever had.

For us, this is like going to a new world and exploring without a map. We don’t know what strange features we’ll find, but we’re going to look everywhere, and find out. Except our journey is bigger than that; our journey doesn’t involve a world, it concerns the universe. This whole enterprise give us such an opportunity and so much potential to find out more. It is a real scientific adventure.

Whatever’s out there, we want to find it

Unlike the start of LHC, when we were reasonably sure that we’d either see a Higgs boson or else break the Standard Model if it wasn’t there, there isn’t a clear path to follow to start our adventure off. There isn’t a breach in the theory to prise open to see what lies beneath; we have to find one.

We need to test every part of the Standard Model for cracks with the high energy data, to look for new, unexpected particles that blow our current understanding out of the water, to search everywhere we can with this fantastic machine. Here at Liverpool, we’re ready. We have teams working on three of the four LHC experiments, which are poised to interrogate the new data.

Whatever’s out there, we want to find it. We have too many unanswered questions about the universe, and too much unfinished business with it, to stop now.