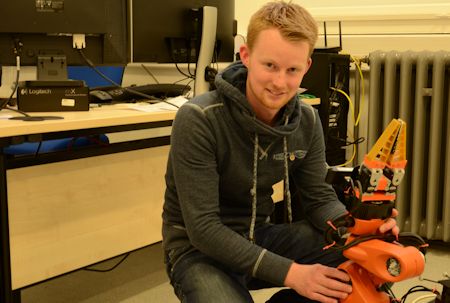 Daniel's research aims to overcome current limitations of robots that are used in various fields.

Daniel Claes is a PhD student in the recently founded smARTLab, which stands for swarms, multi-agent and robot technology, and learning lab. It is part of the Agent ART group in the  University’s Department of Computer Science.

“Within the fields covered by the name of the lab, my research aims to overcome current limitations of robots that are used in various fields.

Nowadays, robots are widely used, especially in industry. For instance, there are ports and warehouses where robots transport the goods, and it is hard to imagine car manufacturing without the help of these huge robot arms that carry, weld and mould many parts of the cars automatically.

However, there are many disadvantages to these systems. For instance, in car manufacturing, these robots are immobile and statically programmed, which means that they will carry out pre-programmed tasks and cannot adapt to changes in the environment.

As a result, the robots need to be caged behind huge fences, in order to prevent injury to humans, as the robot arms would not stop moving when somebody gets in the way.

More specifically, if something unexpected happens, it can have disastrous consequences. Also the maintenance costs are high, since if a new different task has to be done, it has to be programmed by experts.

In the other cases, when many robots are used to gather the goods, there is in almost all cases a central controlling software that takes care of assigning the tasks to the robots and ensuring that no collisions happen.

The problem with this approach is that if the central controller fails, the whole system breaks down. Also, when more and more robots are used, it becomes exponentially harder to plan for all of them, up to the point, where it becomes completely unfeasible.

To overcome the problems with the current systems as outlined above, my research aims towards the factory of the future, where mobile robot teams and humans work together, and the robots are self-organised without the need of a central controller.

Of course, this is a very ambitious goal and it will still take decades to be actually deployed in the real world. During my PhD, we are mainly developing and evaluating the theoretical models, and showing proof of concepts.

We are looking at different ways of self-organising robots, which are for example inspired by nature (swarms) or decision theory. The robots need to observe the world and decide autonomously which tasks they want to perform.

Additionally, the robots have to be able to react to changes in the environment. For example if one robot fails, another should take over without the intervention of a human.

The robots that we work with are mobile platforms, i.e. they move around in the environment. This causes many problems, as it is impossible to move and sense the world with absolute accuracy. For instance a driving robot might think it moved one meter forward, since the wheels turned the required amount of times, however due to friction or wheel slip this is not the case.

Thus, another problem to solve is how to deal with these uncertainties and how to incorporate them into the models.

There is a yearly robotics competition, the RoboCup, which is famous for robot soccer. The stated goal is to beat the human world champions by 2050. Recently, it has launched the RoboCup@Work competition, in which we have participated very successfully for the last two years.

This new competition aims to simulate a small-scale industrial setting in which the robot has to perform industry related tasks. During summer last year, the competition was held Brazil, where we competed against other teams. Our team, smARTLab@Work, was able to perform the tasks very well and we won the competition. So we have the honour of being the “world champions in RoboCup@Work”.

It is very exciting to be in robotics research as there any many developments going on at the moment. Self-driving cars, autonomous drones and personal robots are some examples of what is currently being developed.

It can be very frustrating at times. The robots seem to have their own will sometimes and just do not want to work the way we want them to. Luckily, up to now the actual reason is usually a hardware failure or a software error.

The best reward is when our ideas work out and the robots actually do something smart and sometimes even some unexpected behaviours emerge.

To summarise my PhD in the words of a friend of mine: I get paid to play with robots.”

You can watch the latest work from the smARTLab on youtube: