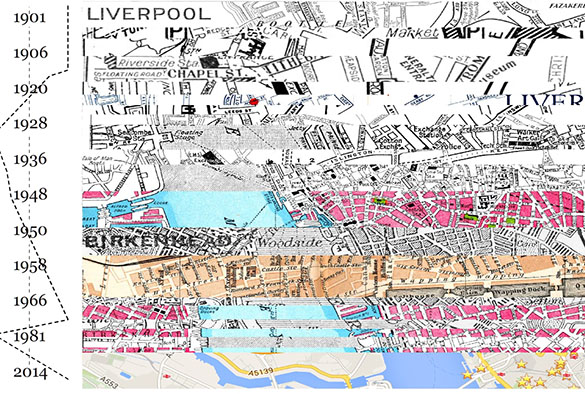 Images created by Uruguayan artist, Brian Mackern, during a residency in Liverpool will be disseminated on social media throughout April in the next stage of a Latin American Cyberculture Project.

Brian said that his work, This Too Shall Pass, is based on “the curve interpretation of the socio-economic ups and downs of the city during the last century, designed as its own signature or footprint.”

An image a day

Throughout the month, the project’s @latamcyber account will tweet an image a day of Brian’s work using the hashtag #citiesindialogue, with the aim of generating interaction and engagement.

The project is the brainchild of Professor Claire Taylor and Dr Jordana Blejmar, from the University of Liverpool’s School of Histories, Languages and Cultures.

Professor Taylor said: “Using retweets, favourites and the hashtag #citiesindialogue, members of the public are encouraged to comment on and vote for their favourite image.

“The people of Liverpool are so frank and open, and good with everyday jokes that I was made to feel warm and at home. This fed my curiosity and meant new themes constantly arose”

“The content of Brian’s work is the city of Liverpool itself, so if any of the locations are familiar to the audience, or if anyone has their own photos they would like to share, please tweet them using #citiesindialogue.

“We will be offering a signed poster by the artist, as well as a first edition copy of the entire artwork, to the winner whose tweet is selected from all who participate.”

This next stage follows hot on the heels of the March Twitter galleries, which saw images from four participating artists tweeted, with audience members encouraged to favourite and retweet their pick.

Brian, who hails from the Uruguayan port city of Montevideo, said: “The people of Liverpool are so frank and open, and good with everyday jokes that I was made to feel warm and at home. This fed my curiosity and meant new themes constantly arose.

“The last century was tough for Liverpool. And although it is in good shape now, the This Too Shall Pass title reworks what may be an aesthetically pleasant animation and carries in its own existence the seed of ups and downs. I think it is good to remember that history is not a sharp line but a balanced negotiation between both these values.

Brian will be offering insights into his work throughout the month, and will also engage in a live Twitter chat on Wednesday, 22 April between 12 and 2pm.

The Cities in Dialogue exhibition is part of the Latin(o) American Digital Art Project. To find out more follow @latamcyber and visit: https://latamcyber.wordpress.com