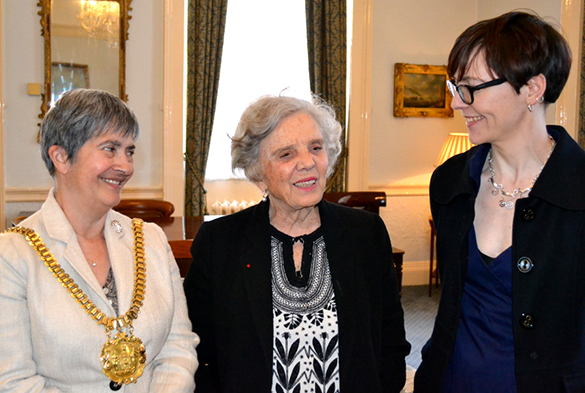 Mexican writer, Elena Poniatowska delivered a talk at Liverpool Town Hall as part of a University-supported event to coincide with a major Tate Liverpool exhibition.

One of the world’s most renowned Spanish-speaking female authors, Elena discussed her recent work – a fictionalised biography of the artist, Leanora Carrington, whose work is currently being shown at the Tate.

Introducing the author, Dr Niamh Thornton, a Senior Lecturer in Latin American Studies in the University’s Department of Modern Languages and Cultures, said: “Winner of many awards, writer of novels, short stories, essays and interviews, author of texts that have defied categorization, Elena Poniatowska is a creative and intellectual force.

“A precursor to the boom in women’s writing in Mexico of the 1980s and 1990s, she has mapped out her own particular trajectory as someone who has drawn attention to those at the margins and those the official histories have forgotten or would rather forget.

“Never afraid of speaking truth to power and of advocating for the marginalized, Elena Poniatowska remains a vital voice in Mexican literary, social and political life.”

Organised by the Embassy of Mexico in the UK, the event was one of a series related to Mexico and the UK due to take place across the country throughout 2015.