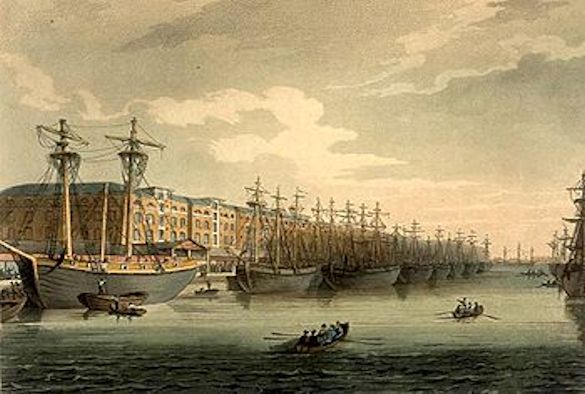 Joseph G. Kelly, is an ESRC funded PhD candidate in the Department of History whose research focuses on the debates surrounding British business and profiting from slavery in the post-emancipation period.

How much of a debt does modern Britain owe to our slaving past?

Britain’s Forgotten Slave Owners, a new series on BBC 2, seeks to answer this question by exploring the 1833 British abolition of slavery, specifically the government’s decision to compensate slave owners to the tune of £20 million.

This pay-out, the largest ever to private citizens, represented 40% of government expenditure and is estimated to be equivalent to £17 billion in today’s money.

The series has sparked press interest in the growing number of academics interested in the legacy of slavery in Britain. This burgeoning field includes a number of University of Liverpool researchers who are interested in how the profits of slavery continued to flow into Britain even after Caribbean slavery had come to an end.

Over the course of a two-part series host David Olusago reveals how the profits of Caribbean slavery, as well as the huge compensation pay out, were reinvested in Britain itself.

Episode One travelled to the West Indies to explain how the brutal economies of slavery were developed, before heading back across the Atlantic to show how the profits reaped had a lasting affect on British society.

Successful slave owners were able to elevate themselves socially and famous landmarks such as Harewood House serve as testament to the wealth and power that could be accrued through human exploitation. A trip to London’s West India Docks also demonstrates how the legacies of slavery are mapped onto Britain, a topic also tackled by Liverpool’s own International Slavery Museum.

However, slave owners were not only located among Britain’s great and powerful, as the show notes many middle class and lower middle class people found themselves in possession of enslaved persons.

This insight is built on the stellar work of University College London’s ‘Legacies of British Slave-Ownership’ project. Working with government compensation records researchers on this project identified a large number of small-scale slave owners, who often gained their property through inheritance or as payment for debts.

This discovery undermined the traditional view of slave owners as Caribbean based and isolated from British society. In fact there were 3000 British slave owner claims, accounting 50% of all slaves owned. These claims are now searchable in an online database created by the team at UCL, a fantastic, and open, resource for anyone interested in the topic.

First-year undergraduates have been tracing how far the families of the founding fathers of the University of Liverpool benefited from slavery and post-emancipation compensation payments.

The conclusion of Britain’s Forgotten Slave Owners aired yesterday and explored the slave owner campaign for compensation and how that money was reinvested across Britain. In doing so both the programme stresses that the story of Britain and slavery doesn’t end at emancipation, and the University’s History Department is as the forefront of exploring these links further.

Whilst slavery in the British Caribbean ended in 1833 it continued to thrive in the American South, Brazil and Cuba. Many British businesses had strong ties to these slave societies both buying their slave produced cotton or sugar, and providing the manufactured goods used to purchase enslaved persons on the West Coast of Africa.

My research looks at how this profiting from slavery was justified, or simply ignored, in a Victorian Britain that was officially committed to opposing slavery throughout the world. My colleague, Joe Mulhern, deals with similar issues by investigating the labour practices of British enterprises in Brazil, an economy dominated by slavery until 1888.

Britain’s relationship to slavery is complex and forms an important part of our history. For a long time the ways Britons profited, directly and indirectly, from exploitation lacked attention and programmes such as Britain’s Forgotten Slave Owners, as well as research at UCL and Liverpool, can be seen as promising steps in shining a light on modern Britain’s inheritance from its slavery past.