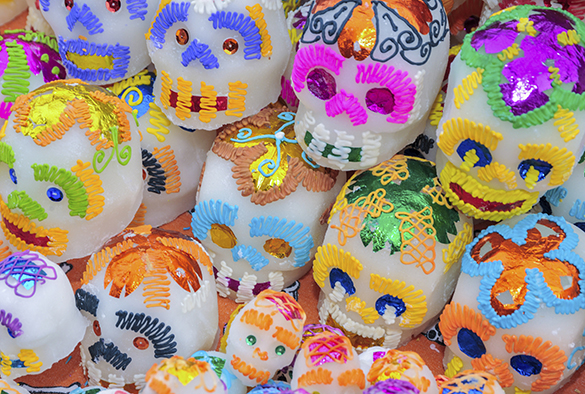 Join Mexican Day of the Dead celebrations and discover the films, art, languages and literature of Iberia and Latin America during the University of Liverpool’s week-long exploration of the regions’ rich and diverse culture.

Coinciding with Halloween, the Dia de los Muertos (Day of the Dead) is a festival that sees people across Mexico come together to remember and celebrate lost loved ones. And, in homage, the University has organised a Dia de los Muertos celebration, on Monday November 2, that will open a packed schedule of events for Iberian and Latin American Week.

Organiser, Ana Reimão, from the University’s Department of Modern Languages and Cultures, said: “We will be building a Mexican Day of the Dead Altar that everybody can add to throughout the week. The Manchester Mexican Student Society will be present to tell us more about this old tradition that is alive and vibrant in contemporary Mexican culture.”

The week then opens out across campus and the city, with story-telling at Central Library, film showings at Liverpool Small Cinema and a special Hispanic music request show with Professor Roger Wright on Vintage Radio.

Liverpool Small Cinema will screen The Search for Emak Bakia (Oscar Alegria, Spain, 2012) at 7pm on Tuesday November 3. In Basque, with English subtitles, the film follows the director on a quest to find Emak Bakia, the house near Biarritz where avant-garde filmmaker, Man Ray shot his 1926 feature of the same name.

“With such a wide range of events, we hope there will be something for everyone and that the audience will create their own cultural encounters”

Between 11am and 1pm the following day, award-winning Portuguese documentarian, Sergio Trefaut will present extracts from his films and discuss his career, before Liverpool Small Cinema shows his 2004 feature, Lisboetas at 7pm. A trip to a rarely shown city, the poignant documentary considers the way immigration changed Portugal at the turn of the 21st Century. Film specialist, Dr Tiago de Luca will conduct a Q&A with the director after the screening.

An hour earlier, at 6pm, Liverpool Central library will host the trilingual edition launch of children’s story, Buri and the Marrow. This is the first ever commercial publication in Totonac, an indigenous language from Mexico. Lucia Brandi, a PhD linguistics expert, who coordinated the trilingual edition, will discuss the book as well as her experiences with the Totonac community.

Lucia will be back at Central Library to lead a Buri and the Marrow story-telling session for families between 11am-12pm on Saturday November 7.

On Thursday morning at 10am, students will do battle in a Translation Slam before Silvioa González-Barroso leads a Galician Language Taster at 1pm. An Old World versus New World wine-tasting event will open evening activities and help participants limber up for Salsa Night at The Casa on Hope Street, from 8pm.

Ana Reimão said: “With such a wide range of events, we hope there will be something for everyone and that the audience will create their own cultural encounters.

“We hope to encourage a wide range of participation especially by speakers of other languages and would be thrilled to have a strong presence from the Spanish, Portuguese, Catalan and Basque speaking communities of Liverpool.

The week will be wrapped up with the E Allison Peers Symposium, this year working to the theme: Iberian and Latin American Cinemas in Dialogue.

Iberian and Latin American Week runs from November 2 -7 at venues across the campus and city. For the full schedule of events, please visit https://www.liv.ac.uk/modern-languages-and-cultures/iblaw15/ To join the conversation on twitter use #IBLAW15