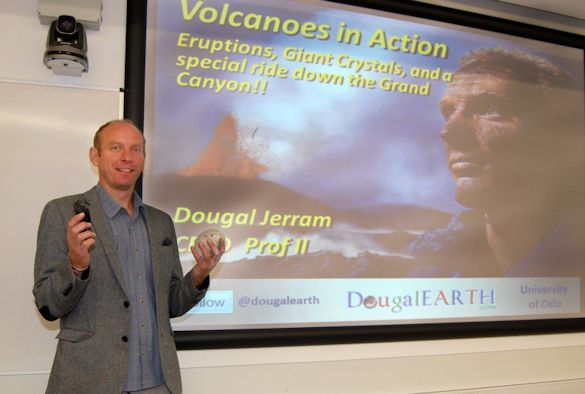 Writer, TV presenter and alumnus, Professor Dougal Jerram, gave a lively and informative lecture about the explosive nature of volcanoes to an audience of school children, teachers, students, the public and members of the Liverpool Geological Society.

Billed as ‘Volcanoes in action’, the lecture included video clips of famous volcanic eruptions, a view of the volcano model used in the BBC’s ‘The One Show’, insights into the techniques used to film the giant crystals discovered in the Naica Cave in Mexico and background information about his experience on the BBC `Operation Grand Canyon’ series with Dan Snow.

The lecture was held to mark Earth Science Week 2015 and the subject of volcanoes was chosen as this year marks 200 years since the eruption of Mount Tambora in Indonesia, the largest observed eruption recorded by humans, ranking a 7 (or “super-colossal”) on the Volcanic Explosivity Index.

The winners of the 2015 national Earth Science Competition for Schools, organised by the Petroleum Exploration Society of Great Britain (PESGB) and the Earth Science Teachers’ Association (ESTA) and based on the 1815 volcanic eruption of Tambora, were announced at the lecture.

The event was sponsored by the PESGB and it was live streamed so that schools and colleges who were unable to attend could still enjoy it.

Professor Jerram obtained his doctorate from the University in1996 for a research project which looked at how rock textures in volcanic and igneous rocks are formed. He was awarded the Murchison Fund by the Geological Society of London in 2006 for his early career contribution to the study of hard rock and tectonic geology.

He is a volcano enthusiast who uses books, scientific papers, journals and television programmes to introduce as many people as possible to these explosive events.

He has made many media contributions on the news and the radio relating the Earth sciences to the general public and has appeared on the BBC, National Geographic, Discovery Channel, History Channel and Channel 4.