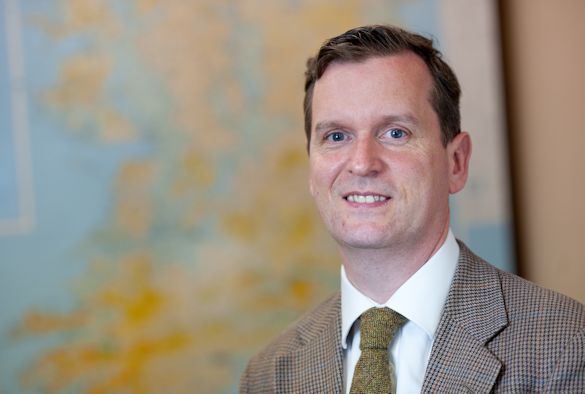 Frank Shovlin has recently been appointed Professor at the Institute of Irish Studies. He has secured a major book deal with publishers Faber & Faber, on compiling the letters of Irish writer, John McGahern, who passed away in 2006.

McGahern is regarded as one of the leading Irish writers of the latter half of the 20th Century, known for such titles as ‘The Barracks’, ‘The Dark’ and ‘Amongst Women’. The University spoke to Professor Shovlin to find out more.

You’ve recently been appointed as a Professor at the Institute of Irish Studies, tell us about your role and your academic interest?

“I arrived at the Institute in September 2000 knowing little about it or about Liverpool more generally. I quickly fell in love with the city and have very much enjoyed my years at the Institute, both under the leadership of the recently retired Professor Marianne Elliott and now working with her successor as Blair Chair, Professor Peter Shirlow.

“I am currently Head of Department and teach Irish literature in English, concentrating particularly on James Joyce and W. B. Yeats. I have published books on the Irish Literary Periodical and on Joyce.”

What have you been working on?

“I recently completed work on a study of John McGahern’s prose style. This will be published in 2016 by Liverpool University Press under the title Touchstones: John McGahern’s Classical Style.

“Resulting from my work on McGahern I was approached in 2014 by his widow, Madeline, to work as editor of his letters, and in May 2015 signed a contract with Faber, who published all of McGahern’s books, from The Barracks in 1963 to Memoir in 2005.””

How do you feel about scooping a major book deal with a publisher like Faber?

“Working with Faber is a real joy. They publish beautiful books and my shelves at home are covered with Irish classics like Seamus Heaney’s ‘Death of a Naturalist’ (1966), John McGahern’s ‘Amongst Women’ (1990), and Tom Paulin’s ‘The Secret Life of Poems’, all published by Faber. Publishing with them also opens the book out to a potentially even larger audience.”

What will the book focus on?

“My work as editor of ‘The Letters of John McGahern’ will involve me, in the first place, gathering as many letters from McGahern to others as I possibly can, making the decision which ones are fit to be published. It will also contain commentaries through an introduction along with footnotes to compliment the contents of McGahern’s letters.

“It’s a high work intensive job, but hugely satisfying. I had the great privilege of being taught by McGahern in my final year as an undergraduate in Galway back in 1992. He was a quietly charismatic man whose works I still unstintingly enjoy, and so to have this opportunity feels like an enormous slice of good luck!”

‘The Letters of John McGahern’ is scheduled to be released in 2019 through Faber & Faber.