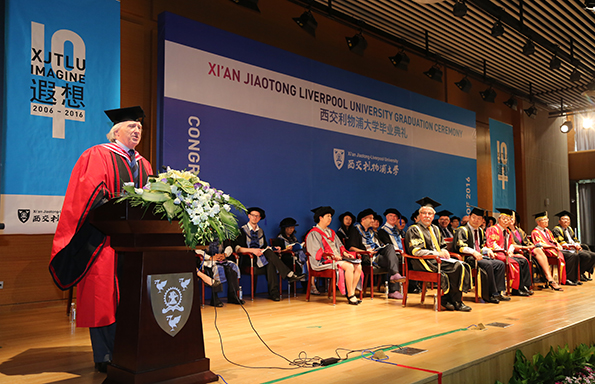 Xi’an Jiaotong-Liverpool University has awarded its first honorary degrees to three people who were vitally important to the University’s foundation.

They were recognised with honorary degrees during XJTLU’s graduation ceremonies this week. This year was the first time XJTLU has awarded honorary degrees, which are usually given by universities around the world to recipients who have made significant achievements in their field or to society in general.

Professors Fang and Bone were part of the team at the University of Liverpool involved in initial discussions with Xi’an Jiaotong in 2003 that would lead to the setting up of the joint venture campus. 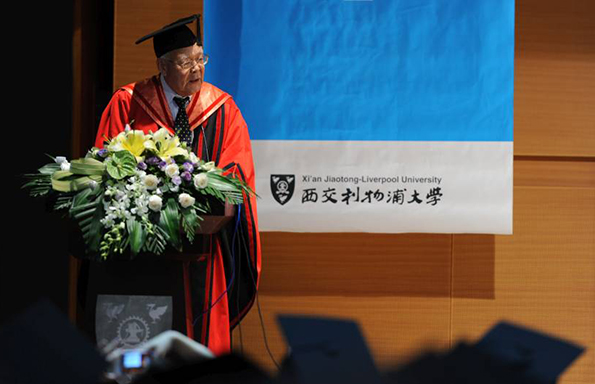 Professor Fang (pictured above), a world-renowned expert in electrical engineering who had a very successful career at Liverpool, had extensive academic connections with Xi’an Jiaotong that led, in part, to the two institutions coming together to form XJTLU. He would become XJTLU’s first executive vice president when the University finally opened in 2006.

He said: “I am truly humbled by the award of the honorary degree. I think it more appropriate as a recognition of the contribution of so many people who were involved in the establishment of XJTLU.”

As vice-chancellor of the University of Liverpool at the time of discussions, Sir Drummond was the driving force behind the Liverpool’s role in the partnership with Xi’an Jiaotong. During his time as vice-chancellor, he also significantly increased Liverpool’s national and international profile, establishing both the University’s and the city’s continuing relationship with China.

Addressing the XJTLU students who were also graduating, Sir Drummond (pictured below) said: “It’s not every day someone gets an honorary degree from a university that he had a hand in bringing into being. Fellow graduates, we share that honour today, we will all leave here today as graduates of XJTLU. We have become part of the XJTLU family from this day onwards. In your own journeys, all the very best of luck.” 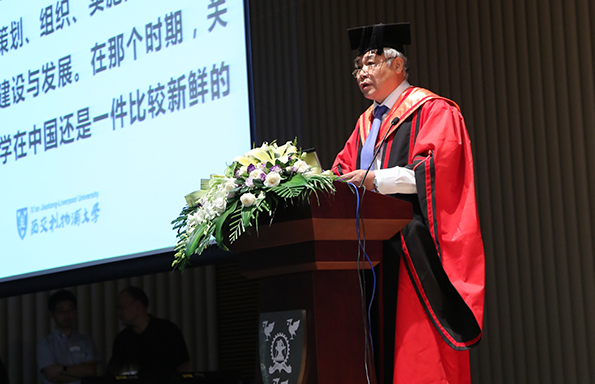 Professor Wang (pictured above) was a founding member, and former director, of the XJTLU Board. The chair of Xi’an Jiaotong University Council since 2003, Professor Wang was able to use his position to develop the very strong partnership and friendship between XJTLU’s two founding universities. He played a crucial role in the establishment of XJTLU in Suzhou Industrial Park.

“I am delighted and excited to receive an honorary degree from XJTLU. For me, it has both great commemorative significance and is a unique honor – one that I will always treasure. As one of the founders of the University and someone who has witnessed its growth, I feel both emotional and proud when I look at all that has happened at XJTLU,” he said.

Professor Youmin Xi, XJTLU executive president, at XJTLU said: “All three of our honorary graduates played important roles in the establishment of XJTLU – we simply would not be here if it were not for their vision, determination and hard work,”

“I’m delighted we’ve been able to recognise their contribution to XJTLU with these honorary doctorates in our milestone 10th anniversary year. We are all so grateful that they were able to travel to be with us this week.”

The awarding of the honorary degrees comes after XJTLU officially celebrated its 10th anniversary with a day of activities that included the opening of the new South Campus development and the launching of the Liverbird of Suzhou narrow boat. 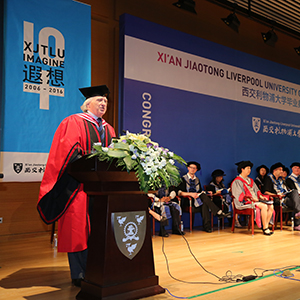