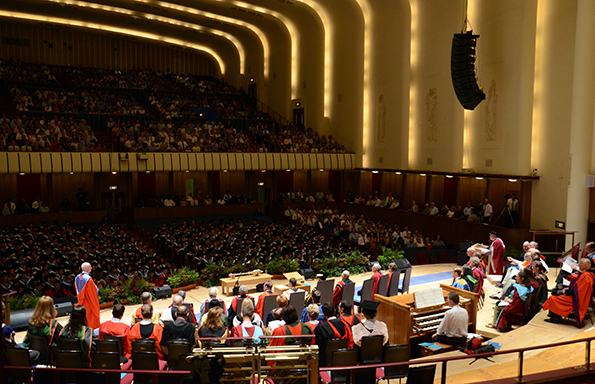 You can watch all our Winter Graduation ceremonies as they happen by connecting to our live webstream service.

The action begins at the city’s Philharmonic Hall this morning, from 10am, when Huyton born classical pianist, Paul Lewis CBE is awarded his Honorary Degree of Doctor of Music.

Following this, successful students from the University’s Faculty of Health and Life Sciences (HLS) will be stepping up to the stage to be received by Deputy Vice-Chancellor, Patrick Hackett.

After a break for lunch, it’s the turn of the Faculty of Science and Engineering (SE) from 1pm. Pro Vice Chancellor for the School of Engineering, Professor Ken Badcock will be congratulating each graduand individually in front of an audience of hundreds in the iconic hall.

And to conclude a packed schedule for day one, at 4pm April Ashley MBE will be awarded her Honorary Degree of Doctor of Laws. Born in Liverpool in 1935, April Ashley is a former Vogue model, actress and restauranteur who became one of the world’s most famous transgender individuals.

The spotlight then turns to the Faculty of Humanities and Social Sciences (HSS), where our successful Management School graduands will be rewarded for all their hard work by Pro Vice Chancellor, Professor Fiona Beveridge.

On Thursday, Director of Royal De Luxe and the man behind the Giant Spectacular in 2012 and 2014, Jean Luc Courcoult will be awarded an Honorary Degree of Doctor of Letters at 10.30am. The University’s former Academic Secretary, Catherine Jones, will also be recognised with an Honorary Fellowship before University Vice-Chancellor, Professor Janet Beer congratulates our final Management School cohort.

That afternoon, from 3pm, sees the final two Honorary Degrees awarded. Hillsborough campaigner and Professor of Criminology, Phil Scraton will be given an Honorary Degree of Laws before a very special moment in the University’s history takes place. Pete Cresswell, who was expelled in 1970 for his involvement in an anti-apartheid occupation of Senate House, will finally be awarded an Honorary Degree of Bachelor of Arts.

The final degrees will then be given to graduands from HSS’s School of the Arts, School of Histories. Languages and Cultures, School of Law and Social Justice and Centre for Lifelong Learning.

To watch all the action, as it happens, please follow this link: https://www.liverpool.ac.uk/graduation/the_ceremony/ceremony_webcast/

More
Leader of 1970 student occupation to be honoured by University 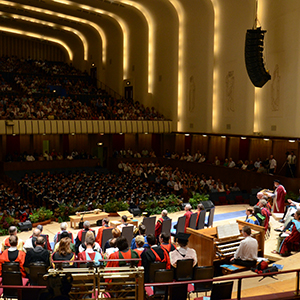