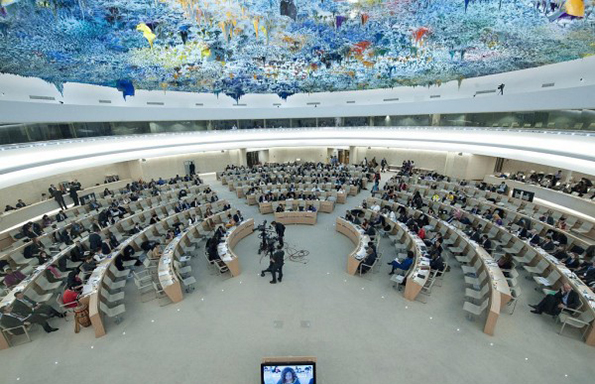 David Whyte is Professor of Socio-Legal studies and Dr Stephanie Khoury is a Research Associate in the University of Liverpool’s Department of Sociology, Social Policy and Criminology.

After at least half a century of prevarication and debate, it looks like the UN Human Rights Council is now serious about developing a new legally binding international instrument on business and human rights. But this long-running debate in the UN system has always been as much about upholding the rights of corporations as it has been about upholding human rights.

Over the past 60 years, the legal status of corporations in human rights law has been protected, though in different ways, through the European and the Inter-American human rights systems.

In 1949, the Council of Europe appointed a Consultative Assembly with the mandate to draft the European Convention on Human Rights. One of the most heated arguments was about whether the “right to property” should be a human right. The UK government, worried about what might happen to the legal status of its nationalisation programme, was opposed. But the UK government lost the debate and the “right to property” was included in the ECHR.

In its final version, Article 1 Protocol 1 reads: “Every natural or legal person is entitled to the peaceful enjoyment of his possessions” (italics added). The inclusion of “legal persons” in Protocol 1 has had a significant impact on the concept of rights in Europe and proved to be a watershed for the endorsement of the principle that corporations can be entitled to human rights protections.

The overall scale of cases in which corporations “claim” rights is not insignificant. As Norwegian law professor Marius Emberland writes in his book The Human Rights of Companies, of 3,307 judgments delivered in the European Court of Human Rights between 1998-2003, 126 (or 3.8%) originated in applications filed by companies or other persons pursuing corporate interests.

Most of the cases in which corporations have the protection of the European Court of Human Rights have been for alleged violations of property rights, the right to a fair trial (Article 6 ECHR) and in some cases freedom of expression (Article 10 ECHR).

The case law on corporate “rights” at the Inter-American Court of Human Rights has not developed in the same way as its European counterpart. The American Convention on Human Rights (ACHR) explicitly denies protection for “legal persons”. There have, however, been cases in the Inter-American Court that allow shareholders to pursue the protection of interests in lieu of the “corporation”.

A key case is Cantos v Argentina (2002), in which the applicant petitioned the commission and then the court, seeking the indirect protection of his companies. The case involved the owner of a large business group and its principal shareholder which suffered losses after administrative and accounting documents were seized without being inventoried.

Cantos petitioned the commission seeking compensation. The commission asserted “… in general, the rights and obligations attributed to companies become rights and obligations for the individuals who compromise them or who act in their name”. In other words, the commission recognised the rights of the company vicariously through the shareholder. Thus, while legal persons (corporations) may not petition it directly, the court nonetheless protects the corporation’s interests by sometimes granting the right to shareholders to petition on behalf of a corporation.

So both the Inter-American and European jurisdictions consider shareholders’ interests to be pre-eminent – either upheld directly as individual shareholders’ rights, or vicariously as “corporate rights”. This raises an unsolvable contradiction – shareholders are rights-holders without having any corresponding responsibility for the potential human rights violations committed by the company in which they have invested.

In other words, in human rights law, as Canadian law professor Harry Glasbeek observes: “[Shareholders] have no responsibility for what is done, to whom or to what injury is done. They are legally immune and socially irresponsible.”

This contradiction has been played out in the UN arena for more than four decades. As we note in our new book on the subject, attempts by countries in the Global North to view corporations as rights holders have a long history.

The fundamental coordinates of this assumption – that corporations have a “right” to development and therefore a “right” to profit – can be found in the debate going on today at the UN Human Rights Council.

As it develops its new treaty standard on business and human rights, the UN Human Rights Council needs to be aware of some profound contradictions. How can we, as human persons, accept the principle that is upheld in the human rights courts – that corporations can use human rights courts to pursue decisions that ultimately enhance the profitability of business rather than human dignity, freedom or equality? What is the point of human rights law if not to protect humans?

If those are largely rhetorical questions, they do identify the core contradiction that frames human rights law: that human rights is used to guarantee that corporate profiteering continues without interruption.