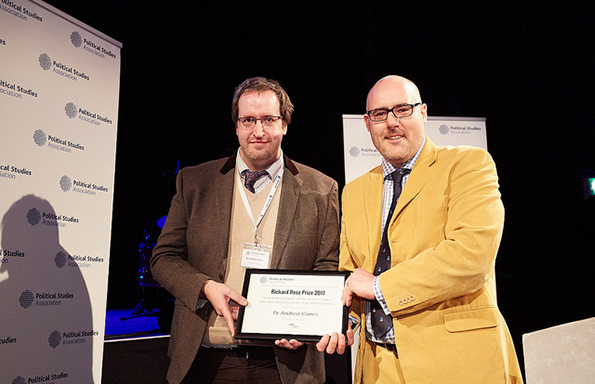 The University of Liverpool’s Dr Andrew Crines landed a major national prize for his “doubly pioneering” research into the rhetoric of some of politics’ biggest names.

Dr Crines, a lecturer in the University’s Department of Politics, was awarded the prestigious Richard Rose Prize by the UK Political Studies Association (PSA) at a glittering ceremony in Glasgow.

This award is for a young scholar – under the age of 40 – who has made a distinctive contribution to the study of British politics. The prize is named after Professor Richard Rose, whose work was instrumental in framing British politics as a field of study from the 1960s to the 1990s.

Dr Crines was recognised for his “significant contribution” by the judging panel, which was made up of luminaries of the political academic world, such as Professor Richard Rose, Professor Wyn Grant and Professor Ed Page.

Commenting on Dr Crines’ success and the importance of his work and approach, the judging panel said: “Dr Andrew Crines has made a significant contribution to the understanding of British politics through his development, and application of, techniques of rhetorical and oratorical analysis to a wide range of partisan, ideology and personal issues.

“These include studies of the use of religious references by prime ministers, the distinctive rhetoric of Nigel Farage, and the arguments and backgrounds of MPs arguing for or against EU membership.

“In addition to a close reading of texts, Dr Crines has used quantitative analysis to provide supporting evidence for his interpretations.

“This makes his work doubly pioneering for he does not rely on quantitative indicators to speak for themselves, nor does he restrict himself to the analysis of traditional political science categories such as left/right at a time when they are no longer sufficient to account for the language that politicians are using to secure support and, equally important, the response of substantial segments of public opinion.”

After being presented his award in front of academic peers, Dr Crines said: “This award was a wonderful surprise.

“My research seeks to show how important political rhetoric is to understanding rapidly-shifting political realities in a world where ideologies alone only provide part of the picture.

“It is a great honour, and very humbling, to have my endeavours recognised by Professor Richard Rose and the other judges.”

Dr Crines, who is a frequent media contributor, has published work looking at the rhetorical styles of politicians of every stripe; from Margaret Thatcher to George Galloway, and Barack Obama to Ed Miliband.

“The University’s Head of Politics, Dr Stuart Wilks-Heeg added: “Winning this prize is a fantastic achievement for Andrew, who joins a glittering list of past winners, including some of the biggest names in UK political science.

“It was a very proud moment for me, as Head of Department, to be present when it was awarded at the PSA Annual Dinner.

“Best of all, because the award is for younger scholars of British politics, we know there is so much more to come from Andrew over the years ahead.” 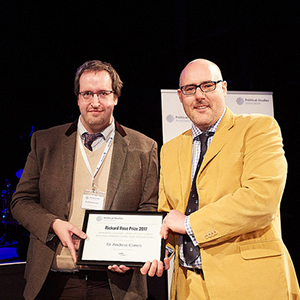