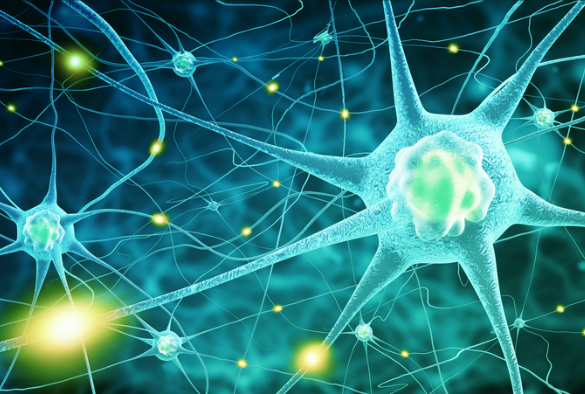 A rewrite of biology classroom textbooks could soon be on the cards as scientists at the Universities of Liverpool and Washington reveal important new insights into how cells communicate with each other. The research is published today in the prestigious journal Science.

Cell signalling refers to the mechanisms cells use to communicate with each other. In humans, signalling normally regulates cell growth and repair and therefore contributes to diverse basic processes that control tissue physiology and brain function. However, abnormal cell signalling contributes to many diseases, including diabetes, cancer and neurodegeneration. For this reason, the proteins that control disease signaling are important targets for many types of clinically-approved drugs.

In the new study, the researchers focused on understanding how proteins assemble into higher order signalling complexes, which control aspects of cell communication and cell fate such as the decision to live or die, using the ‘textbook’ cyclic AMP (cAMP) signalling pathway.

In the late 1960s, cAMP was shown to activate an enzyme complex termed Protein Kinase A (PKA), which can exist in both ‘active’ and ‘inactive’ forms depending upon the type of complex assembled.  It had long been thought that cAMP levels were sensed in cells by a release of the active kinase component from the larger PKA complex, rather like ice cubes breaking apart after being added to a drink.

Using contemporary scientific strategies, including electron microscopy, mass spectrometry, chemical genetics and real-time imaging, the researchers found that instead of being broken apart by physiological levels of cAMP, the signalling complexes remain intact, directly delivering the appropriate message into the correct part of the cell interior.

The study was carried out by Dr Dominic Byrne and Dr Matthias Vonderach in the laboratories of Dr Patrick Eyers and Professor Claire Eyers in the Department of Biochemistry at the University’s Institute of Integrative Biology, in collaboration with Dr Donelson Smith and Professor John Scott and colleagues at the University of Washington.

Dr Patrick Eyers explained: “We believe the finding that PKA protein complexes respond to the second messenger cAMP in a different way than we had assumed for nearly half a century, might bring about other changes in how we understand cell communication, especially the type of signaling we study that involves protein modification (phosphorylation) by protein kinases.

“It might also prove important for a better biochemical understanding of how medicines affect PKA signaling complexes, allowing us to develop drugs with fewer side-effects.”

The next challenge for the team will be to try to explain how the larger PKA signalling complex functions in cells, and how it is regulated by various factors. 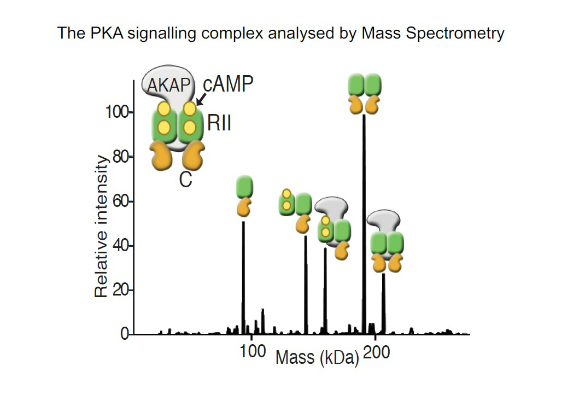 Mass Spectrum and cartoon labelled to show range of different PKA complexes detected. Protein kinase A is made up of 2 regulatory (R) subunits (green), 2 catalytic (C) subunits (orange), and an A Kinase Anchoring Protein (AKAP), which targets the complex to the correct place in the cell. cAMP is indicated by yellow dots