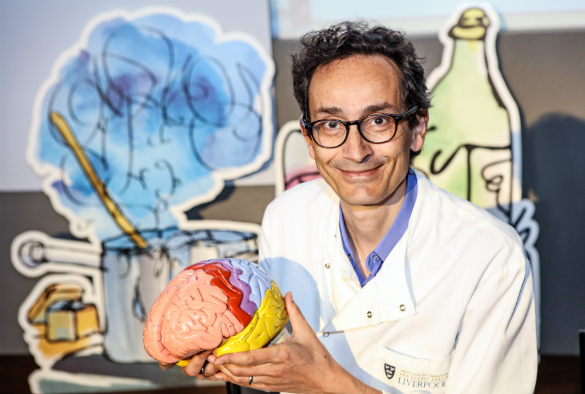 A University of Liverpool professor is set to perform at the world’s largest arts festival this week.

Professor Tom Solomon is taking his ‘Roald Dahl’s Marvellous Medicine’ children’s show to the Edinburgh Fringe Festival for a run of eight shows.

Based on his book about Dahl’s fascination with medicine, and with the help of interactive storytelling, games and activities, the action-packed show explores how the human body works, what can go wrong and how medicine can help fix it.

As a junior doctor Professor Solomon, who is now Head of the University’s Institute of Infection and Global Health, looked after Dahl towards the end of his life and the two spent hours discussing medicine together. Inspired by these late night conversations he wrote Roald Dahl’s Marvellous Medicine, a popular science book that was published to critical acclaim in September 2016 and adapted into a children’s show.

Previously performed at the University’s Open House fortnight, Liverpool Literary Festival and at festivals in Canterbury, Northern Ireland, Edinburgh and Buckinghamshire, the show has sold out every time. This new Edinburgh Fringe run is featured in The Times as one of this summer’s top 40 ‘must see’ events for children and is anticipated to be another sell-out.

Professor Solomon said: “I am thrilled by the interest in the show. It’s proving a great way to engage a new audience with some fascinating science, including some of our research here at the University.”

The iconic Edinburgh Festival Fringe takes place during August each year, opening the doors, streets and alleyways of an entire city to an explosion of creative energy from around the globe. Now in its 70th year, the festival caters for all tastes and ages and this year features 3,398 shows across 300 venues.