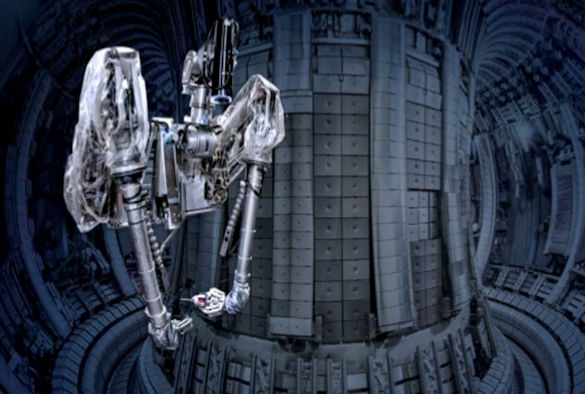 Autonomous Systems’ experts at the University of Liverpool are part of a major UK funding initiative to develop new robotic technologies to improve efficiency and reduce human exposure to extreme and hazardous environments.

Four Research Hubs, involving a number of UK universities and industrial partners, have been awarded a total of £44 million to develop robotics and Artificial Intelligence (AI) for use in extreme environments.

The University of Liverpool is a partner in three of the four Hubs, and their expertise in the design and development of reliable, and verifiable, autonomous systems is being used to develop future generations of autonomous robotic systems for use specifically in nuclear, offshore, and outer-space environments.

The Liverpool team is led by Professor Michael Fisher, from the Department of Computer Science, alongside Dr Louise Dennis ,and  Dr Clare Dixon (Computer Science), Dr Mike Jump (School of Engineering), and Dr Charles Patchett (Virtual Engineering Centre). The funding is part of the Government’s Industrial Strategy Challenge Fund (ISCF) supported by the Engineering and Physical Sciences Research Council (EPSRC), and the University is set to receive over £2 million research funding through these Hubs.

Professor Fisher said: “This is a unique opportunity to work in large-scale hubs aiming to develop safe, reliable, and effective robotic systems. Liverpool’s leading research expertise puts us at the heart of this work, aiming to improve efficiency while reducing human exposure to the dangers of these extremely hazardous environments.”

Professor Ken Badcock, Executive Pro Vice Chancellor for the University’s Faculty of Science and Engineering, said: “Liverpool has an internationally-recognised reputation in the field of autonomous systems and our role in three of these collaborative research Hubs is a reflection of this.”

Professor Philip Nelson, EPSRC Chief Executive, said: “These new Robotics Hubs will draw on the country’s research talent to nurture new developments in the field of robotics and provide the foundations on which innovative technologies can be built. The resulting outcomes from this research will allow us to explore environments that are too dangerous for humans to enter without risking injury or ill-health. The Industrial Strategy Challenge Fund is helping us achieve a joined up approach to research, discovery and innovation.”

The University is a partner in the RAIN Hub (Robotics and Artificial Intelligence for Nuclear) which is led by the University of Manchester and includes experts in robotics and nuclear engineering from the Universities of Bristol, Lancaster, Nottingham, Sheffield, Oxford, and the UKAEA’s Remote Applications in Challenging Environments (RACE) centre.

RAIN will develop innovative technologies that address the challenges posed by the entire nuclear industry from decommissioning and waste management to fusion, plant life extension and new build, and aims to become an international centre of excellence in Nuclear Robotics.

The ORCA Hub (Offshore Energy Asset Integrity Management) is led by Heriot-Watt University and aims to use autonomous robotics to revolutionise how the offshore energy sector assesses, repairs, and improves assets such as wind turbines, oil rigs, pipelines, etc. Using advanced robotics and AI techniques can significantly improve both safety (as humans are removed from offshore hazards) and efficiency in this important sector.

As well as Heriot-Watt and Liverpool, the Universities of Edinburgh, Oxford, and Imperial College London complete the academic team. Industrial partners include the Oil and Gas Innovation Centre, the Offshore Renewable Energy Catapult, along with a range of energy companies.

The FAIR-SPACE Hub (Future AI and Robotics Hub for Space) is led by the University of Surrey and, in addition to Liverpool, involves experts from the Universities of Edinburgh, Salford and Warwick, as well as Imperial College, London. The Hub’s key partners from the space sector include NASA, ESA, UK Space Agency, Satellite Applications Catapult, Chinese Academy of Sciences’ space institutes, and the International Space University.

FAIR-SPACE’s vision is to establish an international centre of excellence in autonomous space robotics to integrate world-class academic and industrial capabilities across the UK and drive more sophisticated and ambitious space exploration and exploitation. This particularly involves devising novel autonomous space robotics to improve efficiency and safety while working towards the longer-term goals of extending humanity’s reach, exploration, and exploitation of outer space.