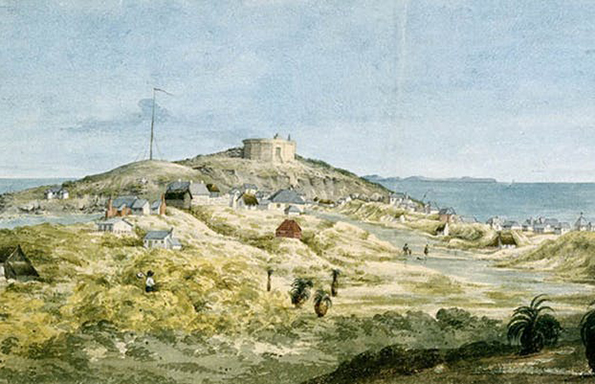 Barry Godfrey is Professor of Social Justice and Lucy Williams is a Postdoctoral Research Associate in the University of Liverpool’s Department of Sociology, Social Policy and Criminology

The Hougoumont, the last ship to take convicts from the UK to Australia, docked in Fremantle, Western Australia, on January 9, 1868 – 150 years ago. It brought an end to a process which deposited about 168,000 convicted prisoners in Australia after it began in 1788.

Convicts had ceased to be sent to New South Wales and Van Diemen’s Land (Tasmania) decades earlier, but Western Australia still wanted convict labour to help with building projects. By the time the Hougoumont landed its shipment of 281 convicts, the Swan River penal colony in Western Australia had been reliant on convict labour for 18 years, and received almost 10,000 male prisoners from Britain. 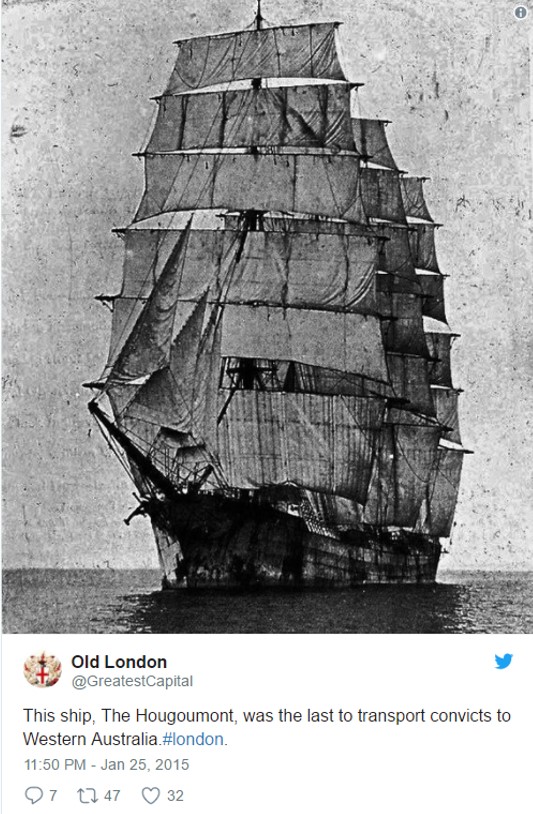 The convict system may have ended with the arrival of the final convicts on the Hougoumont and the disbandment of Australia’s penal settlements, but the people who were its legacy lived on. Some prisoners achieved a kind of celebrity status. Mary Reibey, who was transported to Sydney, became a successful businesswoman and charitable benefactor, and is commemorated on the Australian $20 note.

In Western Australia some of Britain’s “bad” men made also “good”. Alfred Chopin, transported for receiving stolen goods, became a famed and sought-after photographer. Embezzler John Rowland Jones became a reporter for the Western Australian government, and later editor of the West Australian newspaper. Their stories are extraordinary, but they have been used to present a generally favourable narrative which contrasts their heroism against the long-established stain that supposedly blighted those generations of Australians descended from convicts.

It is easy to find thousands of ex-convicts who left crime behind and forged new, ordinary, lives in Australia. Yet, while some ex-convicts became pillars of their communities, got married, and became much-loved and valued friends and neighbours, others struggled.

Our ongoing research shows that the impact of transportation could last a lifetime for those in Western Australia. Many convicts were left struggling with unemployment, personal relationships, and alcoholism, and drifted through both life and the colony. Many re-offended for decades after they were freed in Australia, but only committed low-level nuisance and public order offences – mainly drunkenness and vagrancy – rather than the more serious crimes for which they were initially transported.

The Western Australian records we’ve been using for our recent research and digitised for the Digital Panopticon project reveal the story of Samuel Speed, the last living Australian convict. He was transported to Western Australia in 1866 and died in 1938, just short of his 100th birthday.

Speed was born in Birmingham, England in 1841. He had one brother and one sister, but little else about his family or early life is known. He was in his early twenties when he was tried in Oxfordshire in 1863 for setting fire to a haystack. Homeless and begging for food, he had committed arson in order to get arrested and spend some time in a warm cell. He was sentenced to seven years of convict transportation to Australia.

Speed was conditionally released in 1869 and was allowed to live outside of the prison walls and undertake employment, provided he did not commit any further offences. He found work as a general servant in Western Australia and was finally granted his certificate of freedom two years later. He went on to help build bridges across the vast Swan River, and spent the rest of his working life at various companies around the state. He was never re-convicted of any offence and went on to live a perfectly ordinary and law-abiding life, only coming to the attention of the papers a few months before his death.

By that time, old and frail, and dependent on the care of attendants, Speed’s memories of transportation were faded. Among the few recollections of his former life he remembered that:

Among those unfortunates transported … were men of every walk of life; doctors, lawyers, shirt-soiled gentlemen, and social outcasts tipped together in the hothouse of humanity that was the Swan River Colony.

A kind of rehabilitation

Speed lived long enough to see his former penal settlement become part of the federated commonwealth of Australia. He witnessed the death of an old archaic system, and the birth of a new and confident Australian nation.

To the early 20th-century press, his life was a gratifying confirmation that they system had worked. Western Australia had taken corrupt British convicts and turned them into productive members of society. The report of his death in Perth’s Sunday Times confidently asserted that Speed’s conduct was all that a reputable citizen should aspire to.

He was not by any means the only ex-convict who stayed out of trouble, however, as our research is showing, his behaviour was far better than most of his fellow ex-convicts. It was also better than the rumoured conduct of free settlers who flooded into Western Australia after gold was discovered in the 1880s and 1890s.

Our preliminary research is showing that about 80% of men who arrived on the last convict ship (discounting 67 Irish political prisoners) committed either a regulatory infraction such as absconding, possession of contraband or violent conduct, or a criminal offence during their time under sentence. Given the number of convicts who re-roffended both during and after their sentence, it’s better to think of the transportation system as encouraging enough reform for society to progress. The convicts as a cohort may not all have rehabilitated, but few committed serious offences after they were transported.

As for Speed, he died in Perth’s Old Men’s Home in 1938. Seventy years after the last British convict ship arrived in Australia, the convict period had finally ended.