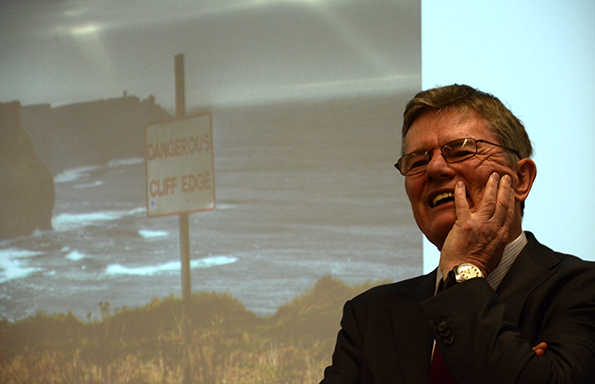 David Smith, who has held the post since 1989, was speaking to a mixed audience of around 200 people, including members of the public, academics, school pupils and students.

He said: “It’s almost certain the transition could last for very many years.

“If we are going to continue the transition until we get a trade deal, then we could be talking about a very long time.

“That doesn’t seem to me to be surprising or unreasonable.”

He drew comparisons with the process undertaken when the UK joined the forerunner to the European Union in the 1970s, stating transition to the Common Agricultural Policy (CAP) took place over an eight year period.

The award-winning journalist and author was speaking at the invitation of Professor Costas Milas.

He opened with a look at the EU referendum result – “it wasn’t a huge surprise but people were marginally surprised by it” – before going on to consider the UK government’s response and the success, or otherwise, of the process so far.

He described the timing of the UK’s invocation of Article 50 as “a bit odd”, considering upcoming German, French and Dutch elections were likely to impede any immediate progress.

He said this decision was “made even odder” by Theresa May’s snap decision to call a general election, which was “rather disastrous”.

When negotiations began, the UK “would have garnered goodwill” with a substantive early offer on citizens’ rights but none was forthcoming.

As the December deadline for the conclusion of phase one of talks approached, David Smith suggested there was “no doubt the EU worked quite hard to help Theresa May”.

He said: “I think they recognised it would be politically problematic for the talks not to reach phase two.”

The Cardiff and Oxford University alumnus then went on to analyse some of the impact felt so far.

The drop in the value of sterling – “rarely been lower” – combined with slow wage growth and higher inflation was a “recipe for misery”.

Referring to official European figures, he said 2015 was the best year for consumer confidence, with almost no inflation and wages rising by average of 2%.

But since then, confidence has “declined quite a bit” and in the UK “hopes of a good deal have fallen as time has gone on,” adding that the country now has the slowest growth in the G7 “having had the fastest, so we went from the top to the bottom”.

He said most of the pre-referendum forecasts had proved correct.

Even leaving and then returning to the EU at a future date would be problematic, as the UK would likely “lose all its opt outs” and “be expected to become members of the Euro”, as is the case with countries currently seeking membership, such as Croatia.

On the prospect of a second referendum, David Smith added: “Personally, I hope there isn’t because the first one was so awful.”