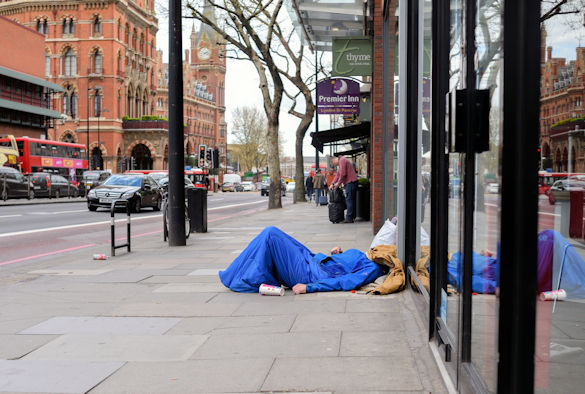 Dr Martin Whiteford is an ethnographer based in the University’s Department of Health Services Research. He is an active researcher and has published widely in the fields of homelessness, substance use and integrated care:

The government’s rough sleeping strategy received a mixed reception on its publication earlier this week. Its headline commitment to investing £100m over the next two years to eradicate rough sleeping, the most visible and damaging manifestation of homelessness, was quickly exposed for what it was: a financial sleight of hand involving both the ‘recycling’ and ‘reprioritisation’ of existing departmental funds.

Critics were also quick to argue that the newly earmarked funding is unlikely to make anything but a modest imprint on the government’s goal of ending rough sleeping by 2017. This, and related criticisms, need to be seen in relation to the dramatic rise in rough sleeping since 2010, with some estimates suggesting that at least 8,000 people are forced to sleep rough in England on any one night.

The new rough sleeping strategy promises to take a three-pronged approach of prevention, intervention and recovery. Homelessness charities have broadly praised this overarching focus, while also welcoming certain aspects of the government’s plan.

Three elements of the strategy are worth pausing to consider briefly. First, the allocation of additional funding for mental health and substance misuse services represents an important, if long overdue, recognition of the gaps in service provision for street homeless people with complex health needs.

Second, the pledge to train frontline staff on how to help people affected by spice, a synthetic cannabinoid that has caused devastation and even death among homeless people, is much-needed if somewhat belated.

Third, the introduction of specialist advisers with expertise in homelessness at every Jobcentre Plus appears to be a subtle acknowledgement of the fact that homeless people face particular challenges in navigating an increasingly complex, computerised and conditional welfare system.

The above examples clearly show that homelessness is both a housing and public health issue. But it is in the arena of housing-related support that the timidity of the government’s approach is most apparent.

This can be seen in the decision to reject calls for a national rollout of Housing First, a flexible approach to supporting homeless people with high and complex needs and histories of entrenched or repeat homelessness to live in their own homes.

There is a certain absurdity in the government valorising the three Housing First initiatives currently being piloted in the West Midlands, Greater Manchester and the Liverpool City Region, when there already exists a powerful and persuasive body of international evidence demonstrating the success of Housing First in combatting chronic homelessness.

Likewise, we know from research carried out by the University of Liverpool and other academic partners into hospital discharge arrangements for homeless people that what is needed to ensure that homeless patients are not simply dumped back onto the streets following a period of hospitalisation is the provision of integrated, flexible and ongoing support.

As such, the international evidence base is clear about what works in terms of ending homelessness; realising this vision will however require far more than the modest policy prescriptions contained within the rough sleeping strategy.