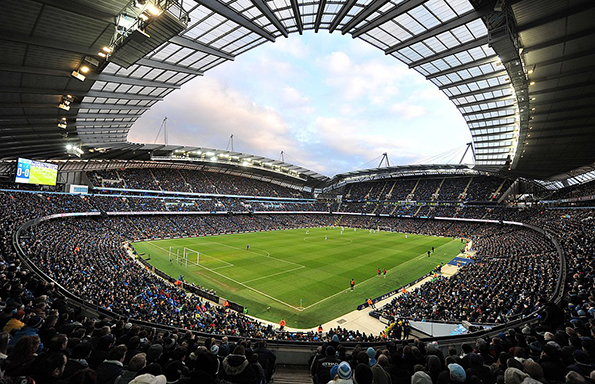 The Der Spiegel allegations in relation to Manchester City seem to have tongues wagging, but are City’s activities illegal, deceptive or just pushing the boundaries of what is within the regulations?

What are the FFP rules?

The short version is that clubs are allowed to make an FFP loss (which is an accounting loss excluding infrastructure, academy, women’s football and community scheme costs) of €5 million over three years. These losses can be extended to €30 million if the club owner is willing to inject the difference into the club by buying shares.

The long version is a 108 pages long UEFA document. Not recommended as bedtime reading.

What are the punishments for breaking the rules?

UEFA has a full schedule of punishments from finger wagging, fines, wage caps, reduction in squad sizes for UEFA competition to the ultimate sanction of being banned from UEFA competitions.

Are these punishments legal and within EU competition law?

UEFA is confident that the rules are watertight, but they’ve not been tested in court to date. As we’ve seen with the QPR case, which cost the EFL £3 million (and presumably QPR similar) and took four years to resolve, the objective of the legal and accounting professions is to delay and argue as long as possible to maximise their fees. Manchester City were by all accounts prepared to use whatever legal means possible to prevent a competition ban.

Are there weaknesses in the rules?

All rules have strengths, weaknesses and loopholes. The rules were partially created by two employees of Deloitte, Martyn Hawkins and Alex Byars, who were sent on secondment to UEFA. Byars was then recruited by Manchester City in  January 2012 and spent three years there, and Hawkins was recruited by City at the same time and is now the club’s Finance Director.

It’s common in all industries to recruit from those with expert knowledge, so no wrong doing here from a legal standpoint,  but if anyone is going to know where the bodies lie in terms of the weaknesses of FFP it is likely to be someone who was involved in writing the rules.

Smart thinking by City or an attempt to dodge FFP? It depends on which football team you support.

How can the rules be abused?

UEFA did fine City £49 million for FFP breaches in 2013, as well as imposing transfer and wage caps for two seasons. City appear to have accepted and applied these rules, and as a result had a refund of two thirds of the fine in accordance with the terms of the initial punishment. 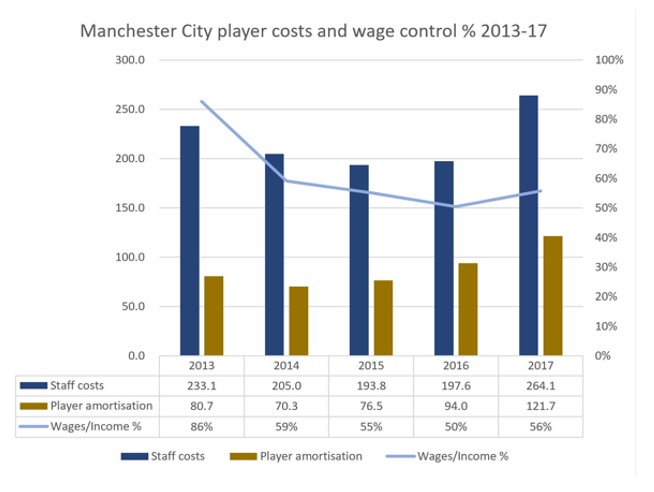 If a club thinks it is going to exceed the allowed losses it could, if it so desired, do one of two things.

Clubs have three main sources of income, matchday, broadcast and commercial. The first two are difficult to inflate, but commercial income could be boosted in relation to deals signed with sponsors who are connected to the club owner.

This is what is alleged in the Der Spiegel leaks, in relation to commercial contracts, such as the one with Etihad Airways, where the claim is that of the £60m a year sponsorship from Etihad, £52 million of this was coming from Abu Dhabi United Group, owned by City’s owner, Sheik Mansour. These claims have been denied.

The other claim is in relation to the sale of image rights to another company, Fordham Sports Image Rights Limited (FSIR).

FSIR had by 30 June 2017 accumulated losses of £74.6 million in five years, which is an achievement for a company with two employees. These losses have been mainly  funded by the company issuing shares for £59 million. 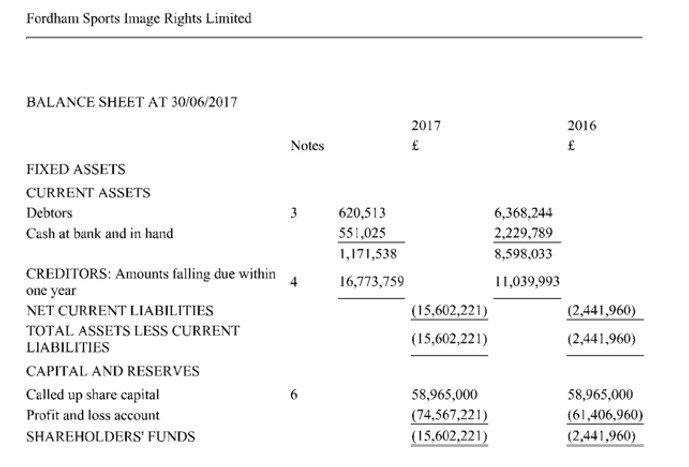 At this stage you might be wondering what is the link to Manchester City? 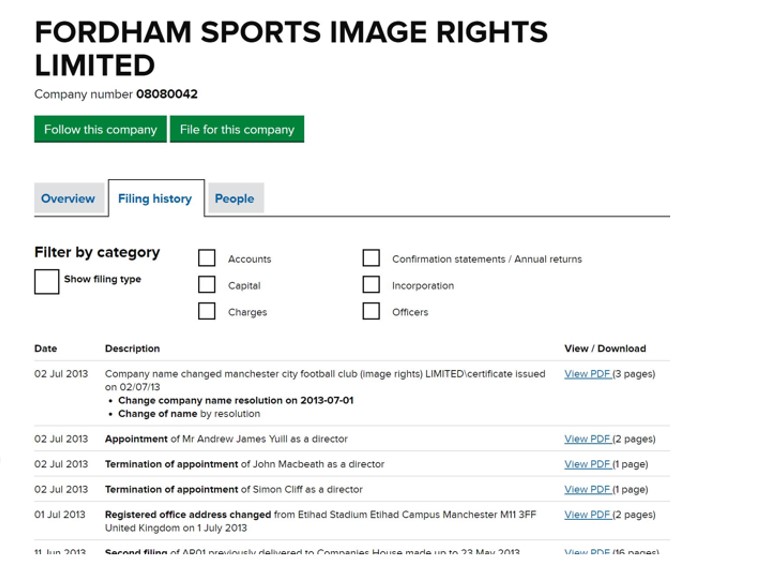 FSIR is presently controlled by David ‘Spotty’ Rowland, a former Conservative party treasurer and major donor. Rowland is notoriously camera shy and isn’t known to be a football fan, although he once tried to buy Hibernian in the 1980’s.

Why Rowland would bankroll the losses of a company involved in sports image rights is unclear.

The allegation appears to be that FSIR paid City for the player image rights in 2012/13 when FFP was first applied, as well as other sales to parts of the City group empire, as a means of reducing losses.

What has happened to the image rights subsequent to the sale to FSIR is unclear, but it is odd that the company has made such huge losses since 2013. 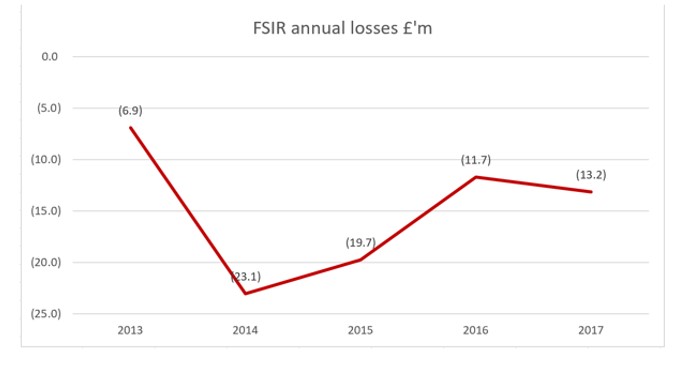 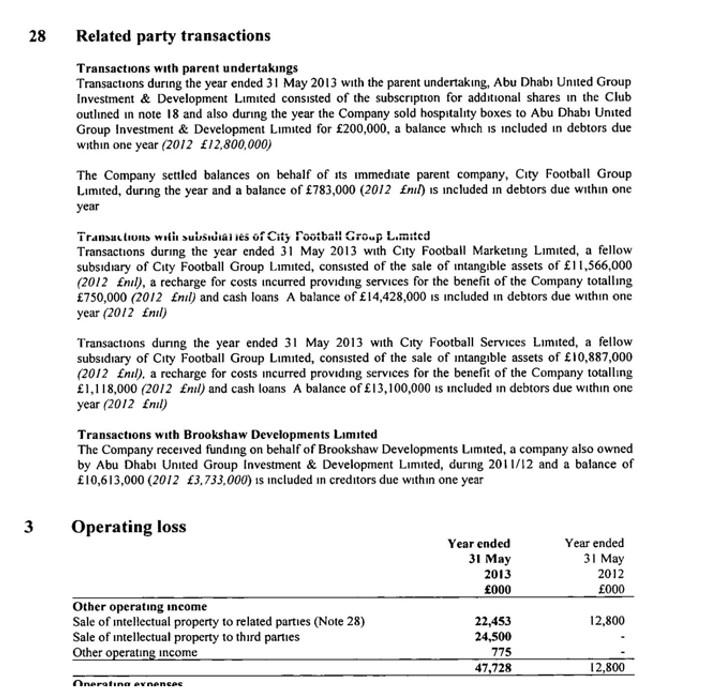 Manchester City are a subsidiary company of City Football Group Limited, which also has interests in football clubs in New York, Melbourne, Tokyo and Uruguay. City’s critics believe that this allows the group to allocate central costs (marketing, IT, legal etc) to the other football clubs and reduce the costs borne by Manchester City, helping it comply with FFP losses in the process.

A look at the income and costs of both Manchester City and City Football Group shows the following: 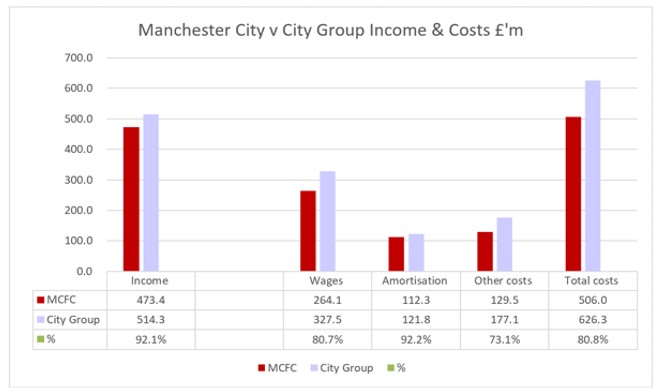 Again, the conclusion is likely to be dependent upon your confirmation bias. A City fan would say that Manchester City generates 92% of income due to participation in lucrative competitions and that many overhead costs, such as rent, are fixed, and so would be borne to a greater extent by other members of the City group to a greater extent. Those who think there has been foul play will point out that Manchester City only bear 80.7% of the wage bill, and that the club would surely pay far higher wages than those in the MSL and A-League.

No one comes out of this with reputation intact. For those who are against City and their owners there is plenty of circumstantial evidence that there have been strange relationships and transactions taking place, but in the three days of reporting from Der Spiegel to date, no smoking gun and some would claim that there’s an agenda against the club because of the background of the UAE owners.

Some of the activities would be seen as good business practice in other industries, and football has a moral code of convenience whenever deeds are undertaken by a club to which one has a particular dislike.

City themselves, with the effective riposte of ‘Fake News’ to the allegations, give the impression of a club that does not want a light shone on it in terms of transparency and governance. If transactions have been undertaken with third parties that are unusual then the best thing, if innocent, is to show the evidence and the club could come out of this smelling of rose.

Der Spiegel’s allegations, whilst containing a few new snippets, doesn’t reveal any slam dunk information (although at the time of writing only three days out of four of the story have been published).

Football is a grubby industry, and every time you hear about stories such as these which paint the game in a poor light (which apply to many, many clubs) it’s inevitable that you fall a little more out of love with the game, but not enough to stop watching, subscribing, discussing and consuming, and clubs, along with the likes of the Premier League, UEFA and FIFA, are fully aware of this.