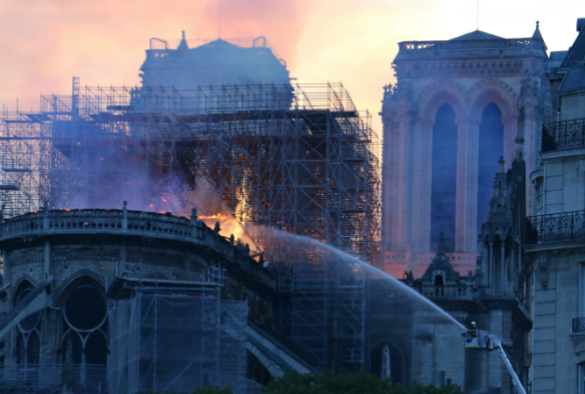 Dr Alex Buchanan and Dr Nick Webb lead the University’s Tracing the Past research project, which is analysing the design and construction of English medieval vaults using digital techniques.

“We were shocked and saddened at the scenes from Paris as Notre-Dame Cathedral blazed in the night. The news that the structure of the building seems to be safe has come as a great relief, given its importance both as a symbol and as a monument of Gothic architecture.

The world-famous cathedral was started in around 1160 and the west front dates from the early years of the thirteenth century. Later in that century, the upper storeys were remodelled to introduce a larger clerestory with traceried windows and the transept facades, with their celebrated rose windows, were added. As the mother church of Paris, the building has undergone many alterations and additions over its history, most significantly at the Revolution, when religious images were attacked, and in the nineteenth century, when architect Viollet-le-Duc undertook a major restoration, including the rebuilding of the wooden spire whose dramatic fall became one of the defining moments of the inferno.

Thoughts are already turning to the possibility of reconstruction, to which President Macron has stated his commitment and many millions of euros have been pledged from around the world. This is where research such as ours can be particularly valuable. Thanks to years of surveying and a recent laser survey by the late Professor Andrew Tallon, Notre-Dame is probably one of the best documented medieval buildings in the world. The level of detail provided by a laser scan, consisting of millions of digital points recorded in space to create an exact 3-D digital model, could enable a reconstruction to produce a stone-by-stone replica of a destroyed building. That is not to say that laser scanning would provide all the answers: scans can only record what is visible and cannot identify what is going on under the skin of the building. In particular, wooden roofs of the kind that has been destroyed at Notre-Dame are particularly difficult to document by digital means. Nevertheless, laser scan data would make it relatively easy to interrogate the geometries of the parts of the vaulting that have been lost, in order to accurately recreate their three-dimensional form. The geometries used would thus be based on an understanding of the design methods originally used by the medieval masons. There is a wealth of expertise that the reconstruction team could draw upon to assist in this work, with researchers in Spain, Germany and the United States (as well as us in the UK) all using digital techniques for documentation, interrogation and reconstruction purposes.

Paradoxically, it has often been the case that disasters have helped to enhance our understanding of buildings. The nineteenth-century architectural writer, Robert Willis, who has inspired our research, explored the debris surviving after the collapse of one of the western towers of Canterbury Cathedral and found a stone from the fourteenth-century vault still inscribed with the setting-out lines used by the masons when cutting the vault ribs. He used this as evidence for understanding how their designs were projected into three dimensions. Viollet-le-Duc used his experience of very thoroughgoing restorations to draw conclusions about medieval vaulting techniques, including at Notre-Dame. Some of his theories about the structural behaviour of vaults were challenged by the destruction of some of the northern French cathedrals during the First World War: at times the ribs collapsed, leaving the webbing, supposedly supported by the ribs, still standing without them. It may be hoped that the damages at Notre-Dame might be equally enlightening for further research on early Gothic vaulting, which can then inform the rebuilding.

Victor Hugo, whose 1831 novel Notre-Dame de Paris (more famous in English as The Hunchback of Notre-Dame) called for the restoration of the cathedral, spoke of three agents of change: time, revolution and fashion. To this should be added disaster. He understood all works of architecture as social products, the sediments of ages – as he put it ‘Time is the architect; the nation is the mason’. The future reconstruction of Notre-Dame should be seen in this light. It cannot return Notre-Dame to how it was before the fire, still less to any ‘original’ medieval state. Indeed, even if timber on an adequate scale were available it could be questioned whether there is value in replicating a less visible part of the building whose significance lay in the original timber and medieval carpentry techniques. Nevertheless the reconstruction work of the twenty-first century, which will doubtless use both traditional skills and cutting-edge technologies, will form the latest chapter in the biography of this beautiful building.”

The article is republished from the Tracing the Past project website. Read the original article here.