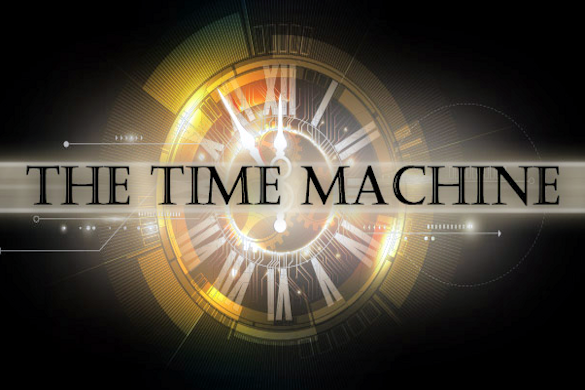 As part of this year’s Liverpool Welcome, new students were invited to join in with ‘The Great Read’, with hundreds of free copies of The Time Machine by H.G. Wells sent out, and an e-book version available to download via the library.

Over this semester there are events planned to further engage with the initiative. The first of these is a film screening of Jordan Peele’s 2019 film ‘Us’, starring Lupita Nyong’o (event details below).

The film shares themes with ‘The Time Machine’, including doppelgangers and fear. Dr Melissa Raines and Dr David Hering from the Department of English, have explored these connections further:

Jordan Peele’s films are heavily influenced by genre cinema and television, particularly its allegorical qualities. His first film, the massive independent hit Get Out, initiated his creation of cinematic worlds where fantastical or science fictional ideas operate as allegories of the racism of American social structures. That film’s opening scene, in which a young black man is kidnapped from a suburban street in a police chokehold, both establishes the inverted horror tropes at play – traditionally, we will see a white character in a ‘scary’ urban neighbourhood that plays on existing social prejudices about the safety of ‘the hood’ – and references one of the most frequently seen images associated with the Black Lives Matter movement, the choking by the police of Eric Garner. However, Peele’s main target in Get Out is ‘liberal racism’, the kind that claims solidarity with African Americans while ignoring or participating in their exploitation. The film’s plot, about a young African American man’s visit to his girlfriend’s family becomes a horrifying fight for survival against a cult that repurpose the African American body.

In Us, the scope of Peele’s vision broadens further. The film is set against the backdrop of ‘Hands Across America’, an event from May 1986 where over 6 million American joined hands in a human chain to raise money for charities that addressed homelessness and hunger. While it proved a striking spectacle, the event raised substantially less money than predicted. Without wishing to spoil the film’s ending, Peele re-imagines ‘Hands Across America’ as a far stranger and more troubling event, and one that incorporates the visibility of those unseen in the publicity of popular charity drives. The relative failure of Hands Across America suggested that a desire for visibility trumped the systemic address of inequality and prejudice in the USA, and Peele’s use of it also draws attention to the problems inherent in the recent trend of 1980’s revivalism, where ‘the 1980’s’ is boiled down to a series of images from TV, music and cinema – the classic example of this is Stranger Things, which simulates the 1980’s as a collection of surface tropes divorced from any significant social or political context.

The central idea of Us is that of a split society. The ‘Us’ of the title stands for both the country (US) and also the way in which a partisan social or political faction will refer to themselves (if you’re ‘us’ you’re not ‘them’) while ‘othering’ groups different from them. Peele depicts this split in an inventive way that appeals to the idea of the superficially successful nation and the unpleasant reality that lies beneath it and nourishes it. In doing so, he also appeals to the long history of the ‘underground’ in African American art and culture, whether it’s the unnamed protagonist of Ralph Ellison’s Invisible Man, the photography of Gordon Parks, or depictions of the ‘Underground Railroad’ on which enslaved African Americans could escape from their captors (the latter was also recently allegorised in Colson Whitehead’s Pulitzer Prize-winning novel of the same name). What Us seems to suggest is that those forgotten or subsumed by history – the ‘tethered’ in Peele’s parlance – will eventually surface and make themselves, and their struggle, known to the world.

In the opening pages of H.G. Wells’s ground-breaking novella The Time Machine, the intrepid Time Traveller says to his assembled friends, ‘I do not mean to ask you to accept anything without reasonable ground for it.’ It is the character who is speaking here, but it may as well be Wells addressing us as readers. Writing at the end of the Victorian period, an age which saw the proliferation of the ghost story, the shift in children’s literature from rigidly moral to fantastic, and the rise of such iconic supernatural figures as Dracula, Wells chose to write what his contemporaries termed ‘scientific romance’—what we would call science fiction. That subtle shift in genre had critics of the period calling Wells a ‘man of genius’. For the reader, it requires a change in perspective. We move from viewing his tales of the extraordinary with a willing suspension of disbelief, to suspending disbelief…but only for now, only until what is described is scientifically possible.

Many of Wells’s works—The War of the Worlds, The Invisible Man, The Island of Dr Moreau—are still both popular and influential, but The Time Machine embodies that collective sense of texts that are ahead of their own time by literally jumping forward into an imagined future peopled by the blind, monstrous Morlocks, who live and labour underground, and the beautiful, childlike Eloi, who live above ground, enjoying the flowers and sunshine. The Time Traveller’s early assumption is that the Eloi are a version of ‘humanity on the wane’, but we eventually learn that Morlocks and Eloi are both human—or rather, what humans have become in response to natural selection, developing into two separate forms, each fit for its specific purpose. The Eloi and Morlocks are dystopian versions of the class-based divisions Wells saw around him—the bourgeoisie and the proletariat, the wealthier classes and the workers. In the novella, the once-powerful elite have devolved into ignorance and immaturity due to their idleness: they even lack the ability to read or write. The once-oppressed Morlocks, carrying out all of the sustaining work in their underground society, have also adapted to their environment and circumstances. They reverse the historical exploitation of their own working bodies through labour by allowing the Eloi to live long enough to breed: they then consume the Eloi bodies as their primary food source.

Ultimately, this enormously popular work of science fiction considers impact of the class divide from a post-Darwinian standpoint, asking what human survival will look like if carried to its extreme but arguably logical limits. The nightmare vision of the future in The Time Machine is all the more disturbing because Wells attempts to give us ‘reasonable ground for it’ through scientific theory. Some of the other predictions in Wells’s stories—chemical warfare, genetic engineering, and climate change—are already eerily accurate. If The Time Machine is a kind of warning, then in considering the current state of the world, the text forces us to ask ourselves, have we actually listened? And what are we becoming?