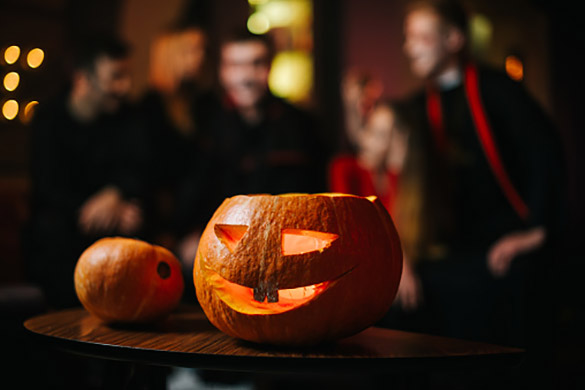 The scariest night of the year is coming up and although we may not be able to celebrate it as we had perhaps planned to, there’s still plenty of covid-secure Halloween activities you can get involved with in 2020.

The Guild are hosting an online pumpkin carving session to help you create a jack-o-lantern masterpiece. You’ll need a pumpkin, pen, carving tool and bowl. Tickets are free and the event is taking place online from 4pm on Tuesday, 27 October.

The Guild are bringing you a Halloween-themed virtual quiz on Monday, 26 October. Starting at 8pm, you can expect prizes, ghoulish questions and even a cocktail masterclass from The Sphinx.

Camp and Furnace are celebrating in style with a Halloween disco on the big day itself. Starting at 3pm, you can expect a day of disco and house classics. There’s also a £200 prize for the best fancy dress. Social distancing is of course in place and you can read about the other measures Camp and Furnance are taking to make sure the disco is safe for all  to enjoy via Skiddle.

Shiverpool is Liverpool’s award-winning ghost tour and this Halloween they’re hosting a Halloween Special. Starting at the Philharmonic pub and ending at the Liverpool Cathedral’s cemetery, you’ll be treated to chilling stories in this 90-minute ghost walk performance.

FACT: Did you know that Halloween was originally a pre-Christian festival called Samhain? People in the UK, Northern Ireland and parts of France would light bonfires and wear costumes to ward off ghosts and celebrate the last day of the harvest.

Who knew there were so many pumpkin patches near Liverpool? We’ve counted at least four farms open for pumpkin picking this year. You can try Sandhill Strawberry Farm in Rainhill, Claremont Farm in Bebington, the Pumpkin Patch in Hightown or Church View Farm in Lydiate.

A Halloween themed burlesque show is taking place at Magnet on Thursday, 26 October. Tickets are £7 and the organisers are raising money for Beating Bowel Cancer.

Day of the Dead at Southport Pleasureland

Missed Halloween? Not to worry, Southport Pleasureland’s Day of the Dead event is taking place on Saturday, 14 November 2020. As well enjoying the rides, there will be a live DJ, fireworks, fire eaters and samba drummers. Tickets are on sale now.

🎆👀 DAY OF THE DEAD SNEAK PEEK… REHEARSALS ARE UNDERWAY! 👀🎆💀 🔥 A little look at our fire crew in action during last week’s rehearsal. 🔥 We’ve also got a Live Samba Band 🥁 Stilt Walkers 😱 DJ 🎧 Plus Much More! Tickets are selling fast, so click the link to purchase yours & ensure you don’t miss out! Children under 90cm ENTER FOR FREE and family tickets are available! And for this night only, all our rides will be at the very special price of ONLY £1.50 each!

A post shared by Southport Pleasureland (@pleasurelandsouthport) on Oct 23, 2019 at 6:30am PDT

The Liverpool Medical School Performing Arts Society are hosting an online murder mystery themed evening where fancy dress is welcome. The Society will be donating the £2 donation fee to St John’s Hospice and is hosting the event from 7.30pm on Friday, 30 October.

Scary film with the Postgrad Society

The Postgrad Society are going to be screening a scary film via Teleparty (previously Netflix Party) from 7pm Thursday, 29 October. Tickets are free and students are voting for the film of their choice.

Paint Yourself Mermaid with the Nursing Society

Third year nursing student Beth is going to be showing you how to create a mermaid look with makeup or face-paint. You’ll need some bright makeup or face-paint and some kind of net (such as fishnets or an orange fruit net). Beth will be using false lashes and gems, but they’re optional. The tutorial is taking place on Zoom on Monday, 26 October from 7.15pm.