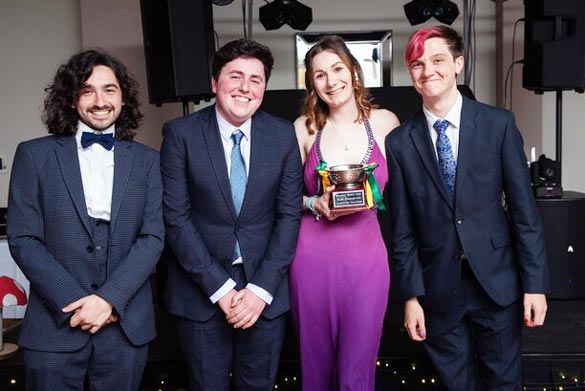 A group of University of Liverpool students have recently been recognised for their contribution to the Student Scout and Guide Organisation (LUSSAGO) Science Jamboree.

The team of undergraduate, postgraduate, and PhD students were presented with an award for their work in preparing science experiments for over 1,500 Beavers, Rainbows, Cubs and Brownies as part of the Science Jamboree that took place from December 2021-January 2022.

Computer Science students James Barber and Nathan Flaherty, along with Joe Barnes from Engineering, Biosciences student Beatrice Overend, and Jack Woodward from Physics, received the award from the national SciJam Committee to recognise their contribution to the success of the programme.

With a small army of volunteers, the team spent over three days packing boxes and arranging for the delivery of 120 parcels containing a variety of experiments devised by University of Liverpool societies: LUMOS (Marine Biology and Oceanography), Physics Outreach and Life Sciences.

Some highlights of the experiments included:

James Barber, second year Maths and Computer Science undergraduate, said: “With COVID-19 meaning we were unable to hold the Science Jamboree in person again, the SciJam Committee decided to produce boxes of experiments for Beavers, Rainbows, Cubs, and Brownies to complete at their local meetings.”

“Removing the in-person aspect of the event meant that we could open it to the entire country, and we had an astonishing response which led to the massive logistical challenge!”

Despite many delays to items arriving and almost half the group catching COVID during the packing days, every box was delivered successfully, and 1,530 young people and leaders have successfully earned their SciJam 2021 badge.