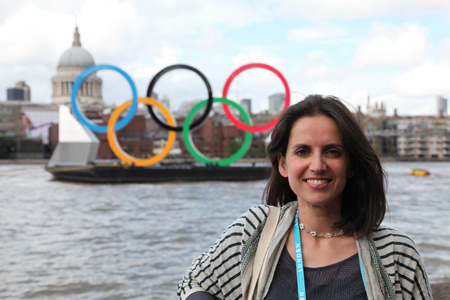 Dr Beatriz Garcia: “We aim to find out if it has provided a platform for long term legacies”

As London 2012 draws to a close, a University researcher has been busy providing her expertise in cultural policy evaluation to the Games.

Dr Beatriz Garcia, who has been acting as an expert commentator  on London 2012’s cultural programme since the bid stage, is evaluating the impact of the Cultural Olympiad, the four year programme of cultural activity across the country which culminates in the London 2012 Festival.

Dr Beatriz Garcia specialises in cultural policy and event-led regeneration and has undertaken research at seven Olympic Games.  She is also a member of the Postgraduate Grant Research Selection Commission at the International Olympic Committee in Lausanne.

”Given that London has a worldwide cultural status, it is critical to assess how this culture infiltrates the Games and defines its core narrative”

She said: “The Cultural Olympiad is an ambitious programme which aims to reach out to millions of people across the UK and challenge perceptions of what art can do to advance social and economic agendas, from engaging youth to bringing disabled artists into the mainstream and repositioning cities and regions as creative tourism destinations.  We aim to find out if it has achieved its objectives and provided a platform for long term legacies.”

“We want to know if it has connected communities and if it has created defining national and international moments that shape the future story of these Games.  Given that London has a worldwide cultural status, it is critical to assess how this culture infiltrates the Games and defines its core narrative”

Dr Garcia, a Senior Research Fellow in Sociology at the University of Liverpool, directed the five-year Impacts 08 programme which set out the social, cultural, economic and image effects of Liverpool’s European Capital of Culture title in 2008.

Since 2011, Dr Garcia has been Head of Research at the Institute of Cultural Capital, a joint initiative of the University of Liverpool and Liverpool John Moores University.

Shooting the breeze at the Olympics