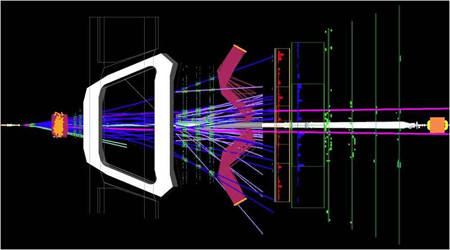 “Sometimes it is a Eureka moment when new physics is discovered, other times it is the result of painstaking measurement and comparison with theory.

The observation of the Higgs this year was the jewel in the crown of electro-weak  unification.

Precursor to discovery of SUSY?

However, as important as the discovery of the Higgs was in contributing to our understanding of how nature works, it was anticipated it would be a precursor to the discovery of an entire universe of supersymmetric (SUSY) particles.

We already know that current physics only accounts for about 5% of the matter and energy in the universe. SUSY particles are one candidate for the missing ‘dark matter’ which is expected to make up 25% of the unknown rest.

Now the Higgs has been discovered the hunt for SUSY is really on.

Textbooks tell us SUSY particles are expected to perform three very important functions in the cosmos. They restore an elegant theoretical balance between ‘light-like’ particles (e.g. photons) and matter like particles (e.g. electrons). They are also a solution to the long-standing question of why the masses of all known particles are close (within a factor of a 100) to that of the proton – the natural mass range. And finally, they are required to allow us to make meaningful calculations of interactions of the Higgs.

“History has shown that the universe tends to pick elegance over unnatural solutions, so this is confounding. Some theorists are  speculating that SUSY, at least in its simplest form, is dead”

At a recent conference in Japan, CERN announced the measurement of a very rare particle,  composed of a b-quark and an s-quark (called Bs), decaying to two heavy electrons, known as muons. The number of Bs decays observed is theoretically very sensitive to the existence of supersymmetry.

Not seeing deviations in the predicted Bs rate, which is what CERN observed, is tantamount to saying that SUSY does not exist, except possibly at a very high unnatural mass range.

History has shown that the universe tends to pick elegance over unnatural solutions, so this is confounding. Some theorists are  speculating that SUSY, at least in its simplest form, is dead.

We are left contemplating a universe that has to be finely balanced to allow it to exist as it does and, although out of vogue for 30 years, the anthropic view seems resurgent. This has profound philosophical as well as aesthetic implications, leaving many with a sense of disquiet.

The search for SUSY continues

The Particle Physics team at the University of Liverpool has a fundamental interest in these results. It built the crucial piece of equipment used in this measurement, the VELO at CERN’s Large Hadron Collider (LHC). When we joined the experiment we hoped to find evidence of SUSY in these decays. That’s one of the reasons we spent 10 years building this detector.

This is so important that we expect to spend the next decade or so searching for SUSY at higher energies at the LHC, and at different experiments. Monica D’Onofrio (a Liverpool researcher) already leads 300 scientists on SUSY searches at ATLAS, in the LHC, which discovered the Higgs. We are also thinking of joining a new US experiment at Fermilab to look for any sign we can of SUSY.

Whatever happens Liverpool will be at the centre of the search.”