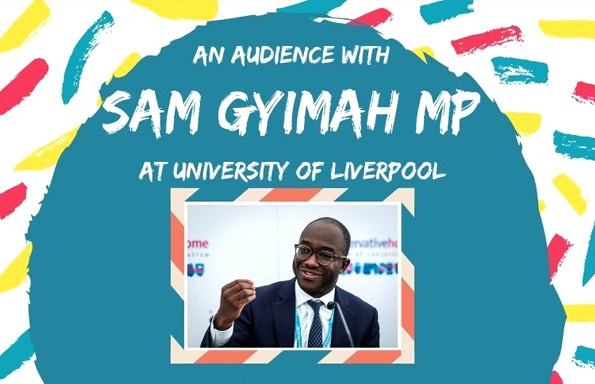 Universities Minister Sam Gyimah MP will be visiting the University of Liverpool’s campus on Friday, 5 October for an event to hear from students about their thoughts on university, as well as wider political issues.

Mr Gyimah, who became Minister of State for Universities, Science, Research and Innovation in January, has been visiting cities around the country to listen to students and he is starting his latest round of visits in the new academic year here in Liverpool. During the event at Mountford Hall, the Minister will be taking questions from the Guild President, Rory Hughes, as well as from the wider audience.

Questions can also be submitted in advance by tweeting your question to @LiverpoolGuild from Monday, 1 October or over the ‘ask me something’ feature on Instagram (@liverpoolguild) stories on Tuesday, 2 October using the hashtag #SamOnCampus.

Attendees should come ready with answers of their own as the Minister will also be directing questions to the audience during the event.

Professor Dame Janet Beer, Vice-Chancellor, University of Liverpool, said: “I am grateful to Sam Gyimah for taking the time to visit Liverpool as part of his tour to learn more about the issues affecting our students, their priorities and what they demand of their politicians.

“This is a fantastic opportunity for them to talk directly with the government minister responsible for universities.”

Sam Gyimah is Conservative MP for Surrey East. He has wide government experience, having previously been the Minister for Prisons and Probation, the Minister for Childcare, the Minister for the Constitution, a Government Whip, and Parliamentary Private Secretary to former Prime Minister David Cameron. He was appointed new Universities Minister on 9 January 2018.

The event will take place between 10.30am and 11.30am on Friday, 5 October, in Mountford Hall, The Liverpool Guild of Students, 160 Mount Pleasant, Liverpool L3 5TR.

University staff are also welcome to attend the event.

The event is free, but students and staff will need to register for the #SamOnCampus event at: https://www.eventbrite.co.uk/e/an-audience-with-sam-gyimah-mp-tickets-50637533225. You will also need your University ID card on the day for entry.