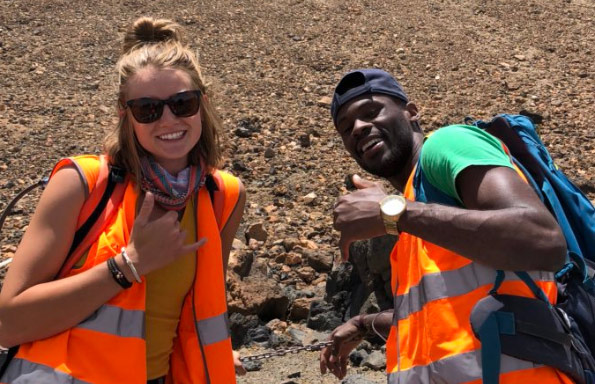 Raimundo Alexandre Lobato is a second year Geography student from Angola who has spent four weeks in Tenerife working alongside scientists.

We recently caught up with Raimundo to find out more about his summer in Tenerife.

What were you doing in Tenerife?

I’ve been working on the GeoTenerife programme, which brings together university science students so they can find out what it’s like to work alongside real-world, experienced scientists.

I was involved in the Environmental Monitoring programme, measuring sulphur dioxide (SO2) and nitrogen dioxide (NO2) concentration from three different sources in the island.

I learnt how to use optical remote sensing instruments (Mini-DOAS and COSPEC) to carry the measurements. I also learnt how to carry in-situ Volatile Organic Compounds (VOCs) measurements at ITER’s lab – Institute of Technology and Renewable Energy (ITER).

During the diffused CO2 degassing I learnt how to do in-situ measurements of CO, CO2 and H2S using a gas chamber and a Jerome, at Teide volcano.

I also visited lava tubes, learning about their formation and the type of life that can be found inside the tubes.

As @chaaneeell says science isn’t always pretty- science is scary and about the unknown but when it is revealed science becomes pretty neat says @EricaDu33615371 – all @GeoIntern are real badass for not fearing the unknown –@livunigeog @LivUni#Tenerife #Science thanks @GeoIntern pic.twitter.com/4pWFWZiwQe

Did you experience any challenges during your time on the programme?

One of the greatest challenges I encountered was having to work more than three hours at an elevation of 3,710 meters above sea level and having to climb the steep cone of the volcano for a whole week.

What did you do in your spare time?

We did loads. I visited natural pools, the National Park of Teide, and went on a boat excursion to watch wales. The accommodation I was staying in had a nice pool and a games room too, which was fun.

What was a typical day like for you on the programme?

6:45am: Get up, exercise and get ready for the day ahead.

8:30am: Go to the lab or the field if I was doing field work. Normally I went to the lab. A driver would take me to the lab and I’d meet my two supervisors – Antonio and Tai.

I did measurements every day and then analysed the data at the technology rooms in ITER.

12pm: I analysed the last set of data from the previous day before we went and took new measurements in Caletillia. We would then drive back to the technology room and analyse the data.

2pm: We’d take a round an hour and a half lunch break. Spanish people seem to love a really long lunch break.

3:30pm: I’d go to the lab to measure and analyse air samples using a gas-chromatographer. The equipment normally took 45 minutes to stop measuring and while we waited we would clean the used sample containers.

6pm: Our driver would take us home and we’d head to the beach with the other interns.

What would you like to do when you graduate?

I want to be in urban or transport planning. I’d really like to tackle environmental issues like pollution and I’m interested in doing a Masters in Urban Planning.

Has the programme been useful?

I asked my supervisors to communicate with me in Spanish and so my Spanish skills have really come on since I started the programme. I’ve also gained loads of skills and experiences that will be useful in my future career. But above all I have made friends for life and made loads of connections with people from all over the world.

One of the biggest things I’ve learnt is the importance of widening my views on environmental issues. I think one of the best ways to overcome issues like pollution is to make people connect the consequences of the issue with something they can relate to.