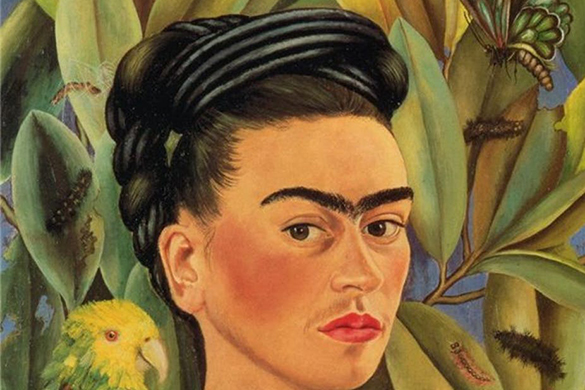 Originally published on The Conversation, this article was written by Niamh Thornton, Reader in Latin American Studies at the University of Liverpool.

Mexican artist Frida Kahlo is the subject of a major exhibition at London’s V&A museum, which has been running since July and tells the story of her life through more than 200 artefacts and clothing. Among the items on display is the eyebrow pencil she used to accentuate the monobrow which – along with her instantly recognisable colourful costumes and the flowers with which she habitually dressed her hair – became her trademark, with which she stressed her indigenous heritage.

I am a specialist in Mexican studies, so Kahlo’s life and work are important to me. So too is the work of another famous Mexican woman of the period, María Félix. An unlikely friend of Kahlo’s, Félix was more conventionally glamorous, and was the biggest film star of Mexican cinema’s “golden age”. Her defined eyebrow arch and its predominance in her performances led me to consider the significance of the brow on screen.

As a Liverpool-based academic, my attention has also been drawn to the “Scousebrow” – a term bandied about on social media. It’s a product of the scripted reality show Desperate Scousewives (2011-12) and, shortlived as the series was, the term has lasted. A Scousebrow describes a brow that is arched, highly structured, tinted or drawn above the brow line, darker than the wearer’s natural hair colour and clearly artificial. This stylised look is not unique to the Scousebrow, but it has led to an unjustified level of abuse and mockery.

Ironically, just as the Scousebrow was being ridiculed by the press, model Cara Delevigne’s thick, groomed brows were being celebrated as natural by high-end fashion magazines. Just like Kahlo’s monobrow, Delevigne’s carefully cultivated brow is presented as “natural”, while the Scousebrow (like Félix’s) is erroneously read as “false”. So, when it comes to eyebrows, it seem that beauty is being defined by social class.

So, in April 2018 we launched the “Brews and Brows” project, a collaboration between the University of Liverpool, Liverpool John Moores University, Edge Hill University and Manchester Metropolitan University which aimed to develop a new way of looking – and talking about – eyebrows. As people came into our Brow Booth, or had 3D scans done of their brows, multiple stories emerged about how people feel about their brows.

There’s no doubt that brows are a big thing: last year the Financial Times estimated that the eyebrow “industry” in the UK was worth more than £20m – and, when Scottish comedian Gary Meikle recorded a vlog in September about his daughter’s obsession with her eyebrows and asked: “When did eyebrows become the most important part of a woman’s body?” it went viral. The vlog attracted more than 15m views (“three times the population of Scotland”, as one of his Twitter fans noted).

Hi Gary, Benefit Cosmetics here, the Queens of eyebrows! We'd love to invite you and your daughter to meet us in store so we can show you exactly why eyebrows are important. There's also a free Brow Wax & Tint in it for your daughter – and obviously you if you'd like too! DM us!

Meikle’s vlog is part of a wider conversation taking place around the brow that is gradually getting more attention beyond the beauty pages. It is also about a broader question about how women’s beauty is perceived and policed.

So it was interesting to see the reaction when British Vogue began to promote its September fashion” issue with Rihanna on the cover. Her skinny brows provoked an enormous debate in the media. As a vocal advocate of black beauty, her skinny brows are a shift away from her “natural” fuller brows and a return to the artifice and thinness of the 1990s more associated with white actors, such as, Courtney Cox as Monica in Friends during its heyday.

The “Brow Booth” was modelled on a photography booth, where participants could sit in and tell us their brow stories individually or in pairs. Mothers interviewed daughters about their practices or shared what they learnt from one another. Friends prompted one another about funny stories from the past. We heard poignant stories of loss and pragmatic solutions to ageing (considerable hair growth in most men and thinning for women). One such story came from a woman fed up with plucking and grooming who got her brows micro-bladed (temporary tattoo) “to save on all that faffing around”.

From the men and women who have visited our “Brow Booth” we’ve heard stories of evolving fashion trends and practices, plucking and growing back, hair loss and surgical intervention. As one contributor said, “I used to check my mascara before I left the house, now it’s all about the eyebrows”. While we have gathered and analyse significant data, our project continues and the stories are still emerging. But the eyebrow is clearly a micro-detail that reveals much about how we feel about ourselves and an awareness of how we groom (or don’t groom) is read by others. Our findings support research into early human cultures about how our brows are integral to us as social beings – we use them to express emotion, recognition, belief or disbelief – but what is clear it that, within this evolutionary function, there are constant shifts and changes in what we like in a brow.

For some years now the “Instabrow” has been in fashion – a well-tended, arched, clearly defined brow structured through carefully artistry and use of specialist products (which explains that £20m industry). And the brow has gradually evolved from thin to thick – although, who knows, Rihanna might change all that, such is her power as an “influencer”.

But what we are hearing through our research is how telling a detail the eyebrow can be and how it challenges assumptions about beauty. From Kahlo’s monobrow to the Instabrow to, perhaps, a return to the sculpted brow championed by Rihanna, fashions change – even if what we convey with our eyebrows doesn’t. So, to answer Meikle’s question: eyebrows have always been one of the most important parts of a woman’s body, even if we haven’t paid enough attention to them before. If you’ve never thought about your brows, you are one of very few – and if you’ve never talked about them, we are keen to listen and share.

Niamh Thornton, Reader in Latin American Studies, University of Liverpool. This article is republished from The Conversation under a Creative Commons license. Read the original article.