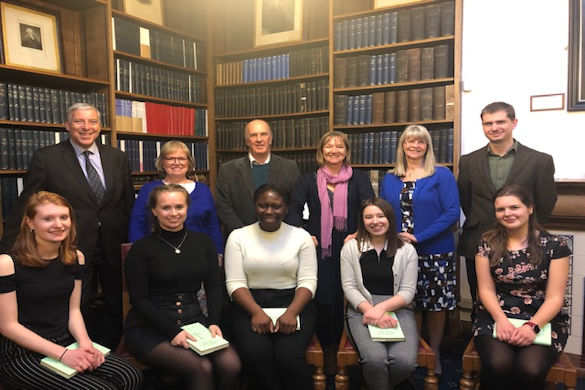 An undergraduate medical student has been awarded the top prize following this year’s History of Medicine Prize Evening.

Esther Matey was placed first by a judging panel made up representatives from the Liverpool Medical Institution, the University and Liverpool School of Tropical Medicine in the annual event after her presentation on Charles VI and his ‘glass delusion’.

The runner-up prize was awarded jointly to Genevieve Easingwood who discussed the place of women doctors in Britain over the last 125 years; and Grace Paris who identified the key factors in changing smoking rates amongst women during the first half of the twentieth century;

The event, which was held this year on 2 April at the Liverpool Medical Institution on Mount Pleasant, gives students a chance to showcase their research.

Five undergraduates from the School of Medicine gave presentations at the prize evening after being selected from entrants across the Merseyside region.

The other finalists from the University’s School of Medicine were Heather Holden who examined the role of Sir Cyril Clarke in the treatment of rhesus haemolytic disease in newborn babies, and Roksana Piontkowski who discussed the evolution of Robert Minnitt’s gas-air analgesia used during childbirth.

A prize fund of £200 donated by the Liverpool Medical History Society will be divided between the participants.

Dr Philip Begley from the Department of Public Health and Policy, who helped to organise the event, congratulated the participants: “As well as their hard work, I think the students’ success speaks to something we do very well at Liverpool – recognising the history of medicine as an important component of the medical curriculum which is complementary to clinical knowledge and skill.”

A further event, open to all undergraduates, will take place in 2019-20.